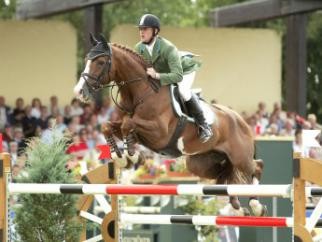 Lucy Davis has had great success on Barron by For Pleasure and they are celebrating their recent 1.60 win in the Grand Prix at Rotterdam. After her win, Lucie talked about her top ranked show jumping stallion – “…but I think most importantly I have an incredible horse with a huge stride and (who is) also very careful”. Lucie rode Barron at the World 2014 games where the American team took Bronze. Lucie also acquired Barrons’ half brother V Pleasure (For Pleasure x Nabab de Reve) just over a year ago. Since February this year, Scott Brash has a new ride named Hello Forever, (For Pleasure x Nimmerdor) on whom he won the feature class of the day at Miami Beach, the historic American Invitational, where Hello Forever flew round the course and powering past the second placed competitor.

Select Stallion offer some of the top ranked show jumping stallions in the UK, and For Pleasure For Pleasure has a WBSFH ranking 5 (12th in 2013). At the start of the 2014 season, For Pleasure was listed as having 394 competitors with 121 jumpers competing at advanced level. His progeny have amassed (as of 2014) €2,138,334 and had three offspring ranked with FEI WBFSH World Ranking List – sourced from the Jumping Studbook (updated June 10th 2015)

Fit for Fun took top spot at the Basel Grand Prix taking home a purse of some £220K from 5 clears, beating the second placed horse by 68 hundredths of a second.

For Pleasure retired from top level show jumping competition in 2006 (at the age of 20) but his career record shows that he is undoubtedly a stallion for breeders looking for a head start in the show jumping arena.

For Pleasure has certainly earned his stallion ranking through his progeny, but his own competition record proves his performance ranking with 3 gold medals on his result record. In 1999, the Germans took gold at the European Championships with another team gold in the 2000 Sydney Olympics. His third claimed in the 2003 European Championships and he also laid claim to the individual bronze with his rider Marcus Ehning.

For Pleasure won an incredible 10 international Grand Prix and 7 Nations Cups with Germany. For Pleasure won over 3 million euros during his career and was the top ranked sire for 2003.

He has classic Hanoverian good looks and conformation. For breeders looking for solid colour, his records show that he has produced an average 2/3 chestnut and 1/3 bay progeny.

His genetics are from the foundation line of top ranked show jumping super stars with Furusio ii, an Oldenburg foundation sire (250 state mares and 50 licensed stallions).