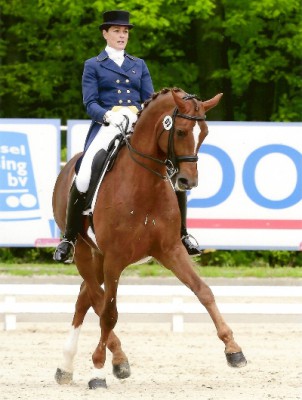 Woodcroft Garuda K, a successful and elegant international grand prix dressage stallion, has a worthy reputation as an improver stallion. British Breeding Futurity results going back as far as 2009 show just how successful Woodcroft Garuda K has been and with no less than 6 elite stallions in his own pedigree, it is not hard to imagine that one of his 28 sons and daughters put forward for British Breeding Futuritys’ grading will be stepping up to the plate. Since 2009, with little variation in scores awarded, his progeny have consistently scored between 8.00 to 9.41 – averaged out this gives a consistent 8.52, placing the average offspring of Woodcroft Garuda K offspring in the higher premium rating for BBFA . With three of his young stock placed in the top 20 in the country, Woodcroft Gonales takes Elite and Reserve Champion within his section.

Woodcroft Garuda K is fully licenced as a graded Trakhener and Westfalian Verband stallion, and the with British Breeding Futurity rankings as a champion stallion on progeny results. Woodcroft Garuda is a Warmblood Breeders Society Reserve Champion & Group 1 Stallion. Whilst most of his British Breeding Futurity progeny are assessed for dressage, he has a fair few going forward for eventing too. With his 2009 assessed stock now 6, it will be interesting to watch their careers in the competitive arena.

It is interesting that of the nine 2014 Futurity Higher Premium awards in eventing, 3 offspring are directly sired by Trakhener stallions (One by Woodcroft Garuda K)