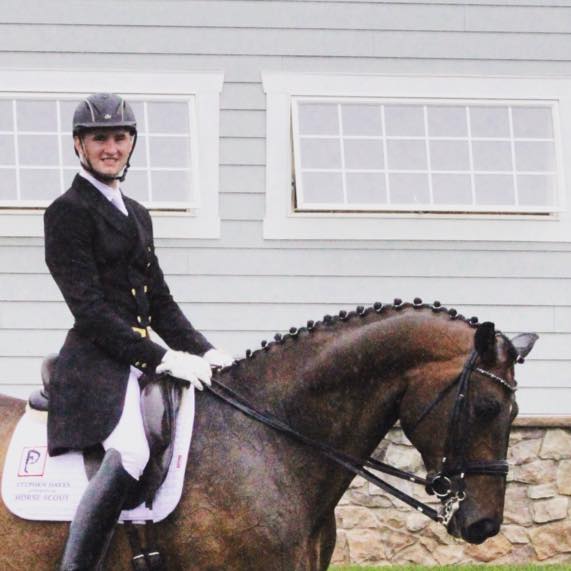 Classical principals from across the pond – Some lucky Uk riders have benefitted from Dressage Clinics with  Dressage Producer Stephen Hayes this summer.

Now back in the USA Horse Scout offers congratulations to Stephen Hayes. Stephen Hayes, a Horse Scout Sponsored Rider, had a triple Grand Prix success, in New Jersey, on his ride Klouseau  owned by karen Blanks.

Already Employed by Karen Blanks (Herself a dressage producer) to ride another of her horses Stephen undertook the ride of Klouseau; and with only a few weeks lead time Stephen worked hard to create a good working relationship and was impressed with the horses down to earth temperament.

Popular on the continent, the USA and with UK  (woodcroft Stud) Producers, his sire is Charlie Chaplin (or E.H. Charly Chaplin) a well thought of Elite Approved Neumunster (1987) Trakehner Stallion with offspring in the USA and also closer to home. He was a prodigious Grand Prix horse winning over 46,000 Euro with his progeny (12012) netting over 100,000K between them.  An eye catcher in the arena with his large white blaze he carries the coloured gene.

Stephen Hayes is an international Dressage Producer and has a profile on Horse Scout.

Stephen Hayes is a young but influential rider set to take the world stage.  To find out more about Stephen read our Horse Scout Professional Bio Blog on his back ground here.

If you are interested in taking a clinic with Stephen then click through to his profile page on Horse Scout and follow his facebook page for information of when he will be visiting Britain again.