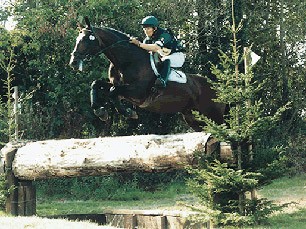 A Thoroughbred Eventing Stallion with so many strings to his bow.  Not only has he had a very successful career in a wide range of disciplines but his progeny too are showing clear star quality themselves.

Catherston Liberator shows just why he is the thoroughbred stallion for eventing with his own concrete career in the event world gaining  66 points British Eventing and in the money at every event in his last season and taking 12 points for each of his last three wins at Longleat, Wilton and Somerly Park Intermediates.

Catherston Liberator is an impressively well made stallion with the classic good looks of the best of thoroughbreds. His head and neck are set well on a good shoulder with a great coupling front to back and he stands four square.  He raced for eight years proving just how good his conformation is and how well his lovely well made legs have served him.

He followed racing with a career in Dressage (435 points: Advanced) and also taking a fair sized pot in the showjumping arena (£346: Grade C) and finished at the top of his game in Eventing (66 points: Advanced). Not content to rest on his laurels he has since been a schoolmaster at Advanced Medium for Jennie Lorsiton Clarks daughter and also taken the ribbons in Veteran Classes at the National Hunter Show classes too.

He has returned from Langaller Farm in Bovey Tracey, after five years, to stand at Catherston Stud and would make a valuable contribution to both amateur and professional breeding programmes.

Breeding that makes a Thoroughbred Stallion right for Eventing

Catherston Dazzlers’ sire Liboi ran 71 races both on the flat and over hurdles. He won 10 races and was placed in 23. That is a seriously impressive success rate!.  He was also a tough thoroughbred who retired sound despite an intense career on the track. He certainly deserved his Champion TB Stallion at the Ponies of Britain Show in both 1984 and 85.  He also took the reserve Champion (over 14.2hh) at the Essex County Show in 1987.

Loboi sired winners in both flat and hurdle racing and also in the show ring.  His other noteworthy progeny is the Graded Stallion Grand Prix Dressage Catherston Humbug.

His dam, Catherston Jetstream, had great breeding lines.  By the Dutch horse Jashin, who was sire of Olympic horse Sunny Boy and Beau Bravado.  Catherston Jetstream was a very successful Show Jumper with earning £2,000 in winnings.  Catherson Jetstream bred 5 foals. Her own progeny taking top places at Futurity  and her daughter Catherston Dream Machine bred Catherston What A Dream, a sliver medal British Warmblood who competed at Small Tour and also Catherston Springstream who took Champion Hunter as a foal and is successfully competing BSJA.

For Breeders looking for Catherston Liberator , he stands at the Catherston in Stockbridge, Hampshire and has a Stallion profile on Horse Scouts’ website.  Use this link to find out more about his successful progeny.