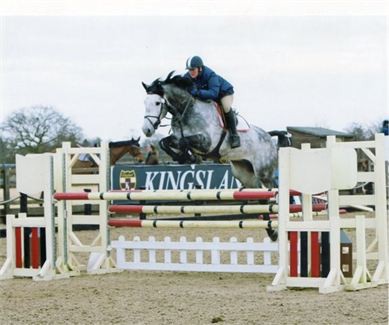 KWPN registered Jumping Stallion Challenge is a handsome grey performance and improver stallion for the serious breeder. KWPN reg and Sports Horse Society GB graded, this Elite AES graded and licensed jumping stallion has a temperament which makes him both keen, clever and entirely “trainable” Tracy Newman who took the ride on him in 2013 has been bowled over by his attitude to training. She says “He finds his job easy, his canter makes you feel as if you could jump a mountain”

With his owner Derek Bolton Challenge started his career as an all round sports horse, He respectably completed 6 British Eventing competitions with each event culminating in just a dressage score to carry forwards (excp. One outing he had 8 time faults – whose quibbling?) He successfully qualified for the British Dressage Open Novice & Open Novice freestyle regionals with scores of up to 70% He had the highest jumping score of the day at his stallion grading. It seems that nothing phases this agile, powerful young jumping stallion.

Challenge has won over £2000. (Actual winnings) in his short career.

3rd in the Newcomers Regional Final as well as

In terms of genetics and cumulative marks for confirmation Challenge has exemplary breeding lines.

Lucky Boys career as an international show jumper was crowned by qualification for the Olympic Games in 2004 having taken purses at 12 of the top international venues his 2003 season with arcus Ehning’s Stable saw him take top four places at the world championships.

Challenges’ Dam Woh I Noor (A Keur mare) is by the KWPN Foundation TB Roven. Roven was bred in Chilli and exported to America where he had a successful jumping career under Geofry Welsch (1.50m) and also Peter Geerink (1.40m). He had a wonderful temperament (one of Challenges good traits) A select few Thoroughbred stallions are used as foundation stallions to introduce particular traits which the KWPN see as advantageous to their breeding programme and Roven was described by the KWPN Jury as “Showing a uniform quality riding type, athletic foals which were high legged and standing in a good rectangular model. The foals have a good trot and a very supple, powerful, balanced canter. The TB injection here complimenting their performance horse breeding lines and boosting the value rating of successive generations. Whilst Thoroughbred Stallions themselves do not gain high values, generally, in the breeding rankings the KWPN highly rate the TB stallion Roven (xx) saying that he “boasts a remarkable breeding value” Examples of his well-known offspring include;

Zinadja (who passed the IBOP with 81.5 points),

Antara (who passed the IBOP with 85 points),

Contessa (the 2010 Central Inspection champion in the Thoroughbred-cross mares division).

One of only seven stalllions from his performance group in 2014,this year Hunter, owned by J.A. van, by Uden by Ukato x Antara elite ibop-(spr) by Roven has been picked as one of 35 stallions to be put forward for Performance tests.

Who I Nor is out of the Grand Prix Show Jumper Koh I Nor (Creool x Twiggy/Lucky Boy(Langraf 1)) and Esther who produce 5 Grand Prix/international show jumping horses out of 6 foals.

You can find out more about the jumping stallion Challenge on his Horse Scout Profile on the Horse Scout website.