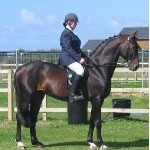 Temple Calypso is a 16.1hh 1991 Breeders Elite graded stallion. He is dark bay who covers naturally. He is very kind, gentle and calm with all mares and knows his job well. He has excellent confirmation, outstanding movement, a natural jumper with a calm sensible temperament. He has some of the best breeding you will come across.His Sire Calypso II a stallion known for siring international performance horses with great jumping ability and great ridability. Calypso II has been one of the most important sires in both Holstein and Hanoverian where he has bred international competitors, and influential breeding stallions. It was Calypso II who introduced the Cor de la Bryère blood to Hanover, ushering a new era of Hanoverian jumping breeding one of the most significant sires in Germany.Calypso II's dam, Tabelle produced SIX approved stallions, starting with one by Congress, then when bred to Cor de la Bryère, the five Calypso brothers all of whom were useful horses and valuable sires. Tabelle is a full sister to Samei, who was the dam of the great Granat, a world champion dressage horse with Christine Stückelberger.Temple Calypso is related to the famous Dolla Girl with Dynamo being her sire and his grandsire.Temple Calypso's young stock have proven themselves without a doubt, they have gone world class, jumping in all countries for Gt. Britain, producing numerous Grade A showjumpers, Horse of the Year Show finalists and Royal International finalists. We have plenty of Temples Calypso young stock ourselves that have already proven themselfBred by Flight View Livery & Stud, sired by Temple Calypso - Temple Million 2002 16.2hh Bay mare grade B jumping 1.30m, Grade C Qualifiers, County open working hunter also qualifying for the Royal International Horse Show 2012. Qualified to compete and compteted at the Horse of the Year Show 2013 in the British Showjumping Amateur 1.20m Classic.Bred by Flight View Livery & Stud, sired by Temple Calypso - Calypsos Rampant Million 2007 stallion sired by Temple Calypso graded and licensed with the Anglo European. Jumping BSJA Newcomers & Foxhunters as a 5/6 year old.Qualified 2013 for the BLUE CHIP JOINT RLF POWER CHAMPIONSHIP, Qualified Discovery 2nd rounds for 2013, Qualified Newcomers 2nd rounds for 2013 & the Newcommers 2nd rounds 2014 also now competing BD at Novice level. Now available at stud.Ali sired by Temple Calypso ridden by Graham Lovegrove who flew the flag for British breeding with 6th place in the 6 year old World Championship"as featured in the Horse and Hound with winnings of just over £25,000.Temple Whatsit sired by Temple Calypso winning just short of £10,000 in A&B's, 1.30m & 1.40m Opens 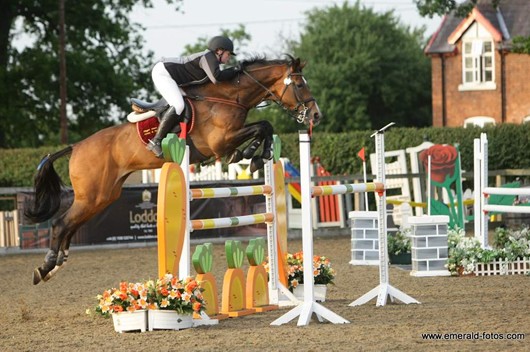