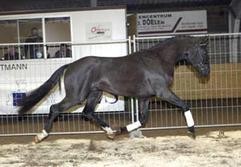 GIVES BEAUTY, ELEGANCE, MOVEMENT, RIDEABILITY AND A SUPERB TEMPERAMENT. An outstandingly beautiful, elegant stallion with World Class bloodlines, his pedigree is filled with state premium mares and some of Europe’s most successful sires. He is a correct, short coupled, long legged model with the uphill conformation required to make a top dressage horse this is combined with natural balance, rhythm and elasticity. He is bold but calm with a superb attitude and brain and is a fine example of the modern sports horse he is a pleasure to be around and handle and is currently handled and ridden by a female. PROGENY BY THE SAME SIRE – SANDRO HIT Sir Donerhall – Tops FN Breeding stallion rating. Soliere – 2008 Hanoverian Champion Salierie – Winner of several Grand Prix successful at World Cup Level. Poetin – 3 yr riding horse champion Warendorf, winner of 6 year old class at Bundeschampionships. San Amour – Main Premium title winner. Victoria – Oldenburg Regional Championship Winner. St Emilion – Sold 2008 PSI Auction EUR 550,000 Silberaster – Oldenburg Champion Mare. SAN LIBERTY CROSSES WELL WITH A VARIETY OF BLOODLINES AND IS A PARTICULARLY GOOD CROSS WITH HOT AND SHARP MARES. HE HAS EXCELLENT FERTILITY WITH AI FRESH AND CHILLED SEMEN. BREEDING SIRES LINE SANDRO HIT needs no introduction described by Paul Schockemohle as `our number 1: Sandro Hit has started a new era in the dressage scene and is already writing sporting and breeding history.` He was the National Young Horse Champion and the Young Dressage World Champion. Sandro Hit`s offspring are known for having great rideability being beautiful and proud and elegant and have been selling at top prices in virtually all auctions around Europe. He is a superb example of the modern sports horse that seems to be able to do no wrong when it comes to breeding one of the reasons for this is because he crosses so well with a variety of bloodlines. He is passing on his talent for dressage to his progeny and they are in turn passing this on to their own progeny. SANDRO SONG was Oldenburg Champion Young Stallion and Main Premium Champion.. SANDRO was very successful show jumping internationally with Franke Sloothaak he has passed on his amazing jump and type to his progeny which include 2006 World Cup Champion Sandro Boy and Silvio I, who is the sire of the remarkable Shutterfly. DAMS LINE LORD LIBERTY G competes at Prix St Georges level and is described as the ideal model being very correct with three excellent gaits. At his performance test he came a very creditable 6th out of 34 in the dressage section. In the German media Lord Liberty G was exclaimed in 2001 to be the biggest breeding success. In 2000 Lord Liberty G`s daughter Liberty Largo conquered the champion’s title with the 5 year old dressage horses. His offspring have been in demand at German auctions and at the 2001 PSI auction his daughter Love Parade was sold for 900,000 Euros. His dam Freya is the daughter of top breeder Freiherr out of the famous Oldenburg Weissenia pedigree. LORD LIBERTY, who is full brother to international jumping horse Gisowatt Liberty of Valerio Sozzi, left a lot of talented jumping horses in Oldenburg. LORD this legendary sire is the sire of the famous international jumping horses Lord Z, Livius and Lugana. FREIHERR is regarded as one of the most influential sons of Furioso II. Freiherr won the Oldenburg stallion licensing in 1978, the next year he won the performance test, and in 1980 he was crowned main premium winner on the basis of his first crop of foals. He has a number of outstanding offspring below are just a few: Weltunder - champion mare of her age group at Aachen in 1986. Feiner Stern – Champion stallion Flashdancer – Dressage star who came 6th WEG in 1994. FURIOSO II was top producing stallion in Germany from 1979-89 based on the winnings of his offspring. In 1990 he was top producer of dressage horses, he produced over 200 state premium mares and at least 20 approved sons including For Pleasure and Voltaire, he is also seen in the lines through his grandsons Cocktail and Welt As (also in Sandro Hits third lineage) who produced Bonfire, Leroy Brown and STC Diamond. CEM swabbed and EVA tested negative and vaccinated. Concessions to proven brood mares and competition mares also a discount for more than one mare. 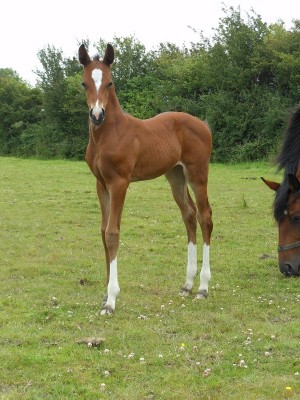