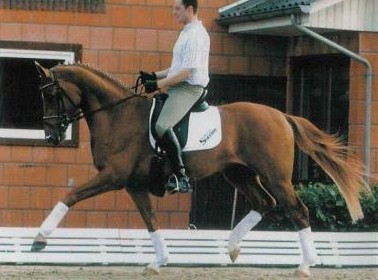 I'm  pleased to announce that Premium Hanoverian Stallion, Benvenuto is now standing in the UK at Champion Park Stud in Leicestershire and is registered with the BHHS and is AES approved .

He was bred in Germany by Christian Heinrich, where he started his career.

This magnificent 16.3hh chestnut Stallion has been performance tested in Germany, where he scored top marks for his temperament and character. Not only does this horse have fantastic temperament but he also has the top quality bloodline to go with it.

Benvenuto, The Breitling W, son received the title of "Premium Stallion" at the Hanoverian licensing in 2005. He was the first stallion ever to receive this title without being put up for sale at any elite auction. Benvenuto's mother Waserfee was an extremely successful mare at the “Ratje-Niebuhur & Louise Wiegel Mare” shows. This dam line has produced many horses, which were successful at the infamous Verden auctions and went on to be successful Grand Prix horses. Waserfee produced Donnerman who was sold after achieving outstanding grades at his 100 day stallion test in Germany. He was the best in his class achieving 143 points and was 3rd overall with a total result of 123 points.

Benvenuto also benefits from his great dam line, sired by the world famous stallion Weltmeyer who was award stallion of the year 1998, Weltmeyer has produced many top stallions and won his performance test in 1997.

Benvenuto himself has competed successfully at PSG level, winning 2 out of 3 PSG classes, he has gained 70% plus scores at Advanced Medium with rider Sharon Edwards. Benvenuto has many offspring who have inherited his fantastic temperament and ride-ability and are gaining great scores at all different levels, some of these offspring include Woodlander, BB King and Benaggio, a licensed stallion in Germany .

Sired by the stallion Breitling who has been awarded stallion of the year 2014 by producing horses at top level dressage. His most successful offspring being:

Butlington FRH (his Licensed Son) was a member of Germany Gold Medal winning team in the Europeans young rider championships 2012. 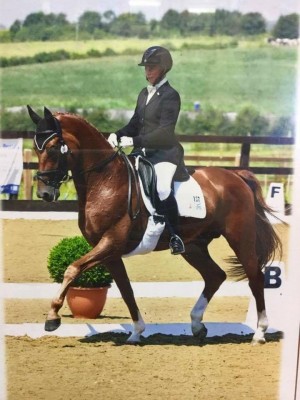