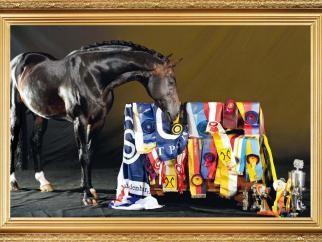 Holsteiner Stallion at Stud Contendro I by Contender (Sire of Bayano/Flora Harris) is Holstein breeding at its very best.  Standing for Select Stallions, Contendro I, was the only Holstiener stallion at stud, in the world, in the top 10 WBFSH for showjumping and eventing. He is ranked number 8 in the show jumping rankings and number 3 in the eventing rankings last season.  His progeny also feature in this years listings for jumping and eventing this June.

This handsome 2009 dark bay Holsteiner stallion stands 16.2hh had a short sport career himself and has mainly been used for breeding. His offspring are exceptionally convincing.

Contendro 1’s progeny read like the who’s who of the competitive arena. These include show jumpers:

With over thirty jumpers are on the World Ranking,  Select Stallions Holsteiner Stallion at Stud must be a first choice for anyone with a seriously competitive mare.

Click here to view this fantastic stallion on Horse Scout