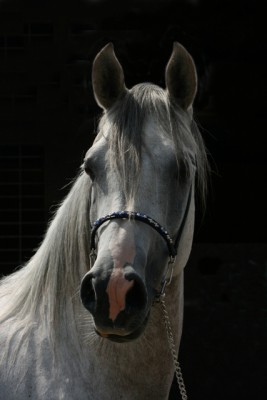 Silver Zenif has sired the first 100% Crabbet for Scotland this year and The Phoenix Field Arabian Stud  who are hoping for good results at the Futurity Awards with Silver Zenif first part-bred bay filly foal Golden Zarifah by AI to Advanced endurance mare Mrs Katie Doyle this year for Silver Zenif their Crabbet Arabian Stallion at stud.

Silver Zenifs profile is a veritable list of top accolades for this lovely Arabian horse.  He just exudes class and Silver Zenif is clear (negative) of genetic conditions LFS/CA/SCID associated with Arabian horses.  He would has all the hall marks of making a great sire to cross with natives or add blood to warmbloods for quality and stamina.

Silver Zenif will be graded with the sport horse society later this year because he is showing great promise for show jumping, dressage and endurance

Top 100% Crabbet Stallion at the Show.

Represented the Hanif family group at the World Crabbet Convention

Silver Zenif has started his unaffiliated dressage and SJ career and featured in the B&W Equine Stallion Parade at West Wiltshire Arena on 14/02/2015.

The Value of the Crabbet line horses with Crabbet ancestry are proven for athletic ability, attractive appearance, and good temperaments. They are seen in many equestrian disciplines, both in those limited to Arabians and those open to all breeds.

The particular virtues of Crabbet horses – sound, athletic conformation, good movement, solid temperament and performance ability – the quality they give to a breeding program shows in any competitive arena, and particularly in the Arabian-dominated field of endurance riding, Crabbet breeding is popular in the “Sport Horse” disciplines such as dressage and show jumping, for which the Arabian Horse Association now sponsors a National Championship.

Holsteiner Stallion at Stud: Contendro I by Contender