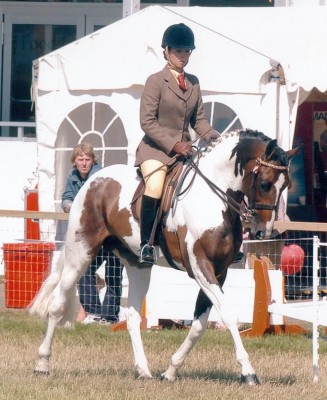 Son of the Elite graded CHAPS sports horse Country Top Gun he has excelled in so many spheres of competitive ridden equestrian sports and Country Farm Stud believe he is the only coloured horse to be Elite Graded for both Dressage and Showing in the UK.

His Dam Pendragons’ Bay (1/2 TB) also foaled the Bay AES Stallion Simbas’ Pride, with substantial BSJA winnings, who was picked or the Spanish Young riders Show Jumping team, a successful finalist for Young Event Horse and a champion in the show ring.

How to judge a Riding Horse Stallion? – Results across the board.

As a young competition horse Country Loan ranger was campaigned under BSJA rules and proved a careful horse capable of consistent double clears. However it was in the dressage arena that his elegance, clear and precise paces and steadfast temperament won the day.

He was Dressage Champion at CHAPS Championships and at the festival of Champions in ’06. Throughout his four year career under British Dressage Rules, it was only on a rare occasion that he did not take home points in his purse. In 2009 he hung his competitive spurs up bowing out very gracefully with marks upwards of 70% at Medium and Elementary levels. Counrty Top Dollar has accumulated a very substantial 200 British Dressage points.

Newly backed as a 4yr (& 5yr ) old he qualified for the Potential Sports Horse Championships. The Show Ring where his laid back temperament , Balanced ride and impeccable manners make him reliable whatever the atmosphere, wherever he may be. Rarely out of the top three he has numerous Royal International Horse Show and Horse Of the Year Show tickets as well as many many Championships taking the ribbons at the UK’s most prestigious County and national Shows consistently from 2006 to 2010 when he took the Performance Champion, Reserve Ridden Champion & Reserve Combine Training Champion and was placed 10th at HOYS 2010 (in his 10th year!) The 2nd highest placed Riding Horse Type that year.

This 16.2hh Bay Tobiano Coloured Riding Horse Stallion has a profile on Horse Scout Stallion Listings. For breeders looking for a general purpose quality Riding Horse Stallion,; Country Top Dollar has, to date, had over 90% coloured foals to plain mares and his foals certainly inherit his elegance, movement and temperament.