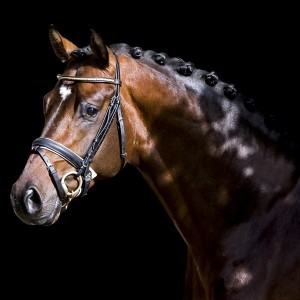 Lauded as a Dressage Stallion this lovely horse has a pedigree to inject performance across all three disciplines. With his young stock taking premium gradings at this years BEF Futurity shows as both dressage horses and eventers.  This Uk Dressage Stallion,  Denver LG, is passing on the best of genetics through both his sire and dam lines. His own good looks and superb conformation are testament to this. He also has a wonderful temperament making him a joy to train and handle at the LG Sports Horses Stud near Macclesfield.

Watching the Uk stallion parade at Twemlows Hall last year I was impressed with him. He moves easily into the collected trot paces showing a freedom through his back and giving us a glimpse of the horse he will become. In his Piaffe he showed very correct collection with good hind foot flexion, the action of a true Piaffe. I am in no doubt that, with maturity, this eye catching AES Stallion will move, from truly impressive, to stunning in the dressage arena. He is short coupled with a wonderful shoulder and length of neck set well behind an archetypal KWPH head. His hind leg has freedom and power and the potential for real promise to excel in the footsteps of his sire Johnson (also known as Glocks Johnson – Verdi V) who was champion dressage stallion at his own licensing in 2005 . Johnson is the son of the Grand Prix Keur Stallion Jazz (Cocktail and Keur Flemmingh) On his Sire Dam Line he has Approved Oldenburg Stallion Sion and also Grand Prix Jumper it’s Otto and his Dam Line Granciano/Landino and also Grannus. Johnson was top competition stallion in 2006 & 7 and in 2007 also took the World Championship Title in Verden. And also won at M level in Stallion classes in 2008 and now has two approved stallions.

The Denver LG dam line (Godiva) is through Landino (Langraf 1) a prolific sire of approved and premium stock was placed 2nd at his grading with an impressive overall score of 137.79. His Son Lord Sinclair broke auction records at 2.8 million DM. Lanciano also bred state premium mares, 22 approved sons and his stock also broke records in the sale rooms and are proven in the show jumping arena. Godivas Dam “Grannschka” bred 4 approved stallions.

Denver LG has a profile on Horse Scout which can be found here where you can find more information on his breeding and also see the other stallions and horses for sale with LG Sports Horses.