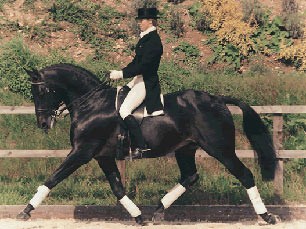 In 2000 Catherston Dazzler was ranked 6th in the World Breeding Federation ranks. A leading WBF Ranked Stallion and held the record as the youngest stallion with the most proven performance horses competing. Today five years on he is still considered one of the Event worlds most serious breeding assets. His eventing  progeny are now competing on the Olympic Stage and are themselves internationally recognised competing Sydney Olympics, Badminton, Burghley and Rome in 2000 and this earned  him a life time achievement award in 202 from the supporters of British Breeding

The list of British Sports Horses that he sired is impressive.

Catherston Dazzler is the Sire of:

Not only was Catherston Dazzler a Grand Prix Dressage Horse but he was also a proven Event Horse and won other important championships such as the best potential competition horse championships.  This stallion shows everything that is best about the British Sports Horse breeding Program.

You can find Catherston Dazzlers Pedigree and details on the Horse Scout Web Site, along with details of other stallions standing at the Catherston Stud