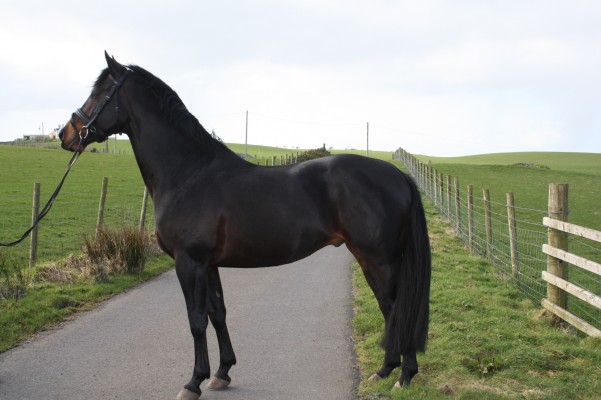 Dowland K.O. Bo Diddley has an outstanding temperament and a superb loose jump. He carries some of the best dressage bloodlines and his foals, out of a variety of mares, have all inherited his lovely athletic movement and temperament. His oldest progeny will be backed in 2014/5. Horse Scout is looking forward to seeing their profiles uploaded and watching their progress.

At his grading, Dowland K.O. Bo Diddleyey scored a nine for his canter, which was described by the judges Lynne Crowden and Geoff Glazzard as “athletic” with “good cadence and engagement of hindquarters”. The judges described his loose jumping as having “natural freedom and a lot of scope”.

Bo has been backed and brought on slowly, and is proving to be exceptionally trainable.

Dowland K.O. Bo Diddleys’ sire Holme Park Kalibre is a full brother to the graded Trakehner stallion Holme Park Krug. Kalibre is no longer entire and Bo is his only entire son, and his Dam Holme Grove Cezanne is a graded BWBS pony mare.

This is a lovely small stallion and well worth checking out.

Click here to view this stallion on Horse Scout