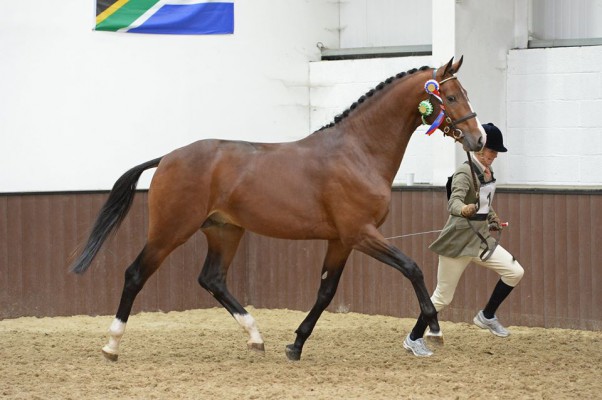 Timolin stands at Catherston Stud. With his first crop of foals born this year Timolin has set a high bench mark on the Futurity Breeding  stage for his offspring.

Catherston Stud, surely, could not be more pleased, Timolin is already proving himself  and has  the important championship qualifiers under his belt.

With an assured future as an imporver stallion this young stallion the head turning presence and superior gaits and build of his dressage pedigree and the jump and ground covering canter to produce not only dressage progeny but is expected to sire horses to event as well.

It must be thrilling beyond words to see a horse that you have bred gain his third Futuriy Elite Grading and the Catherston Stud (he property of Mr & Mrs A G Loriston-Clarke, Lizzie Murray and Hilary Davey) acquired this fabulous young stallion in February this year. Timolin, Graded with SHB-GB & BWBS, is already a father with his first stock foaling this year. Timolin, who is scheduled to go for Sports Horse grading this October, has “a charming Character and loves showing off” says Anne Dicker who manages the Catherston Stud. This year Timolin has started his competitive career and has qualified for both the National Dressage Championships in the Shearwater Potential International Dressage Horse 4 year olds and for the Albion Saddlemakers Young Dressage Horse of the Future 2015 Championships which take place at Badminton at the end of July. So not long until we see him sparkle, but before that he has joined Sports Horse Breeding GB Stallion Parade where, Catehrston say, he took the whole thing in his stride and is building a veritable fan club following.

The next crop of Futurity Breeding Super Stars?

By May Timolin had had four babies all of whom seem to have inherited his good looks and conformation and their sire was out winning the Blue Chip Sports Horse Qualifier. Horse Scout are looking forward to seeing some facebook updates on the Timolin Babies.

Timolins breeding has a great gene pool and the Futurity gradings are all credit to his breeding. Timolins Sire Totilas was a super star (and still is) of the dressage world. His results record with the FEI had 12 wins in 12 outings under Matthias Alexander Rath where he is for the most part outshining his nearest competitor by four or five full marks! An incredible dressage stallion. Born in 2000 he was competing at Grand Prix with Edward Gal by the age of nine and at 15 is still the king of the circuit whenever he competes. He was the first horse ever to score over 90in a dressage competition. His FEI record speaks for its self; a total of 45 1st places in 53 FEI Dressage competitions with three world cup Gold Medals with Edward Gal. “He has taken the sport to a whole new level.” Said Anne Gribbons (2010) of this record breaking horse the technical dressage advisor to the USEF. In his first year at stud he generated fees of nearly €1.4 million. With an embryo sold for 32,000 Euro in 2010.

Whilst there has been controversy over the methods employed in his training, this does not detract from the fact that he has been hugely successful and deservedly reigns supreme in the stallion rankings. Totilas, himself a KWPN Dressage Stallion, is jet black, standing a full 17.1hh he is just a little taller than his sire Gribaldi (Trakhener), and sports four short white socks (a particular feature on both his sire and dams line) as opposed to his fathers two, although his snip is very small in comparison Garibaldi and Totilas look remarkably like each other and of course Garibaldi was also an Olympic Dressage Stallion. Totilas Dam bred 7 offspring four of whom were by Gribaldi. Her early offspring Platini and Ramon where also very successfully campaigned in the dressage arena .

Timolins Dam Samira (also owned by Aram Gregory who rides for Hong Kong) was a Grand Prix horse herself campaigned with Jane Gregory (his wife who sadly died in 2011 was an Olympic Champion twice)). She stood an enormous full 18hh and her dam bred three proven performance offspring who compete/d in Germany. However her Sire Sion was a very successful general purpose stallion with offspring competing at Dressage, Eventing and Show Jumping as did his sire Sultan.

Timolin is certainly set to be a star of the future and Catherston Stud must be thrilled with their purchase. Horse Scout is shortly to publish an interview with Jennie Loriston Clarke where she will talk about Timolin and his future. I know Horse Scout readers will be looking forward to this.

Horse Scout are so impressed with the lovely horse that we have already blogged about him three times. Find out more about Timolin on his Horse Scout Stallion Profile page or read up on his news articles on the Horse Scout Blog.

STALLION AT STUD ‘TIMOLIN’- AT CATHERSTON