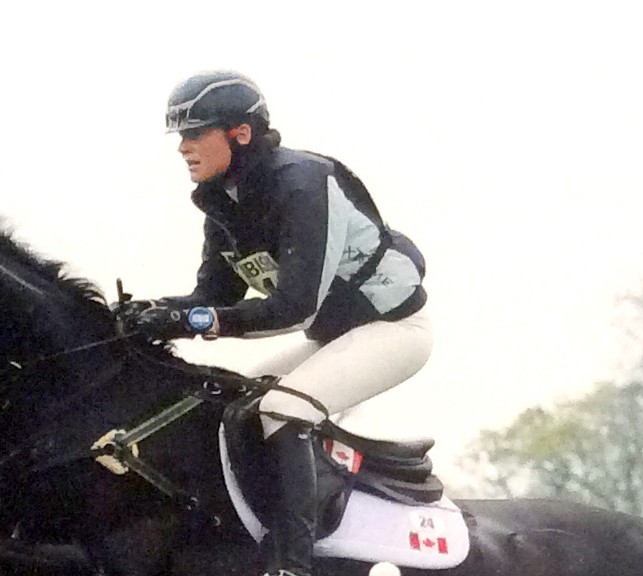 Kathryn Robinson, Canadian event rider
Naunton, England, with our Horse Scout reporter before setting off for the week of her life

International Event Rider , Kathryn Robinson, talks to Horse Scout about her career and her tips for buying an event horse

What are your biggest achievements?

Being chosen to represent my country (I was born in Canada and my mother is Canadian) and ride in the Olympics at Rio. I was travelling as reserve but due to a horse being lame, I’m now part of the team.
I was short-listed for London 2012 and in 2014 was selected for the WEG but was unable to compete because of a technical hitch with the paperwork. I’ve placed 7th at Pau four-star.

Tell us about your top horse, Let it Bee, who you’ll be riding for Canada in South America.

He’s a 15-year old German-bred gelding by Lamerto out of Baroness. I got him as a 7-year old from a guy that had bought him from an auction but was fed up as he had started to stick his tongue out. If I looked at him now I would never buy him — he’s so long, hence his nickname Limousine — and not put together to be a top event horse. But I bought him to do some pre novices to get my confidence back and just kept going. His best discipline is dressage and although he can be a bit hot at a one-day event, he’s very good at a three day and has been extremely consistent this year.

And you rode at Badminton for the first time earlier this year?

Yes, my aim was to complete, which I did with a double clear. I wasn’t the quickest cross country but I didn’t want to over phase him.

How did you get into eventing?

I didn’t grow up in a horsey family but I always loved them and belonged to the local pony club as a teenager. I stopped riding around the age of 16 and then didn’t take it up again until my 20s when I became a working pupil Samantha Albert, a Canadian-born eventer who rides for Jamaica.
She found me my first event horse, Hugo Simon, and I ended up doing quote well on him, competing in one and two stars and coming second at a one star in Portugal.

Who else would you say has been influential?

My fiancee Giovani Ugolotti (the Italian event rider) as he really helped me regain my confidence after losing Hugo. Gio’s my best coach — always honest and no, we don’t argue that much as neither of us can be bothered! We also both visit Henriette Anderson for dressage.

Tell us about some of your other horses.

Suttogo Georg is a 7-year-old, German-bred ex-show jumper who is nippy, spooky but a really good jumper. His weakest link is dressage but he’s not naughty, he’s just never been taught and I hope that will fall into place by next year and we can move up the grades.
I have another 7-year-old called Linus, a 6-year-old named Calling Card and a four-year old called Castello.

And they are all German?

Yes, I like the German horses and we have a good agent out there who I trust and has good eye.

So what would your advice be for others when buying a horse; particularly an event horse?

Go with someone you trust and who can be helpful with regards to the breeding.
Some great stallions produce very nice young horses but they don’t all go on to be a top event horse — look at those with good competition records.

And do you favour any bloodlines?

Linus and Calling Card are by Heraldic — but as he is so old it’s impossible to find them anymore.
We have three in the yard by Duke of Hearts. I just gave the ride on Duke of Champion to Gio… he just grew so big that I felt I couldn’t physically help him show jumping. Gio is pleased… he just got a 6-year-old at novice!

What single thing has changed your riding for the better?

I’ve always suffered from nerves and can freeze at a competition. This year I’ve seen two sports psychologists and they’ve been really helpful giving me exercises to stay focused — it has literally transformed my performance.

And next year is a big year… your wedding to Giovanni. Is it all organised?

The venue is… it’s at my parent’s house. Other than that, the only thing I’ve done is buy the dress! And we’re also going to have to have a mini honeymoon as the date is in the middle of the eventing season!
Kathryn Robinson has a professional Rider profile page on Horse Scout.  Click through and see her horses and read about her career as a professional Event rider and trainer.