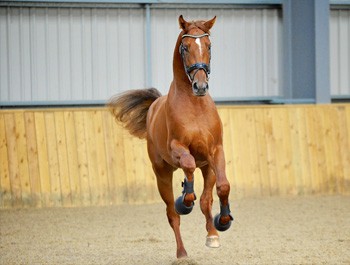 Probably one of the biggest moving horses EVER bred at Woodlander…all the power and the glory. This is a loose and supple youngster with a phenomenal canter, a huge walk and a big and expressive trot. Not only does he impress, but he bring a totally convincing pedigree with him.The amazing sire, Don Frederic, who consistently presents himself in a superior manner, was the shining champion stallion of the Mecklenburg licensing 2011. He impresses with an immaculate conformation and three paces of exceptional quality, with the highlight of an enormous power from the hind legs and maximum elasticity. At his 30-day test in Schlieckau in 2012, Don Frederic achieved the maximum mark of 9.75 for his rideability judged by a test rider. With 8.35, he was the global Reserve Champion of a strong field of participants. He has won several dressage classes, is often very well placed and is, to date, trained up to advanced level. As a result of his first crop of foals, which included many premium foals, he was nominated for the Oldenburg main premium in 2013. In 2015, his first sons were licensed, for example, the Hanoverian premium stallion Dow Jones, who was one of the top prices of all German licensings with a knockdown price of 220.000 euros.The black coated sire, Don Frederico, was honoured as Hanoverian stallion of the year 2012. He was champion of his licensing and stallion performance test. In his sporting career, he has won several advanced level/S level dressage competitions up to St. Georges. 87 descendants are successful at advanced level dressage. Leading the way is Diva Royal, winner of numerous advanced level dressage competitions and Team European Champion of young riders with Stella Charlotte Roth in 2010. At the Olympic Games in London 2012 she contributed, ridden by Dorothee Schneider, to Germany´s team Silver Medal. Isabell Werth´s movement genius, Don Johnson, winner of several Grand Prix competitions, is an offspring of Don Frederico, who has currently sired 40 licensed sons, amongst them the World Champion of dressage horses Dramatic.His dam, Real Perfect was a pick for Woodlander and bred two super foals for us before going on to produce an Elite daughter for Wheatley Wood Stud. Her sire Rousseau should need no introduction as the close up sire of Zack and also the grandsire f Double World Champion Sezuan.Her mare line is often represented at the top mare shows in Germany including in the last few years the Herwart von der Decken Schau, Ratje Niebuhr Schau and the Louis Wiegels Schau.This is a young horse that must be chosen for movement AND temperament and is destined for the international sport cadre.