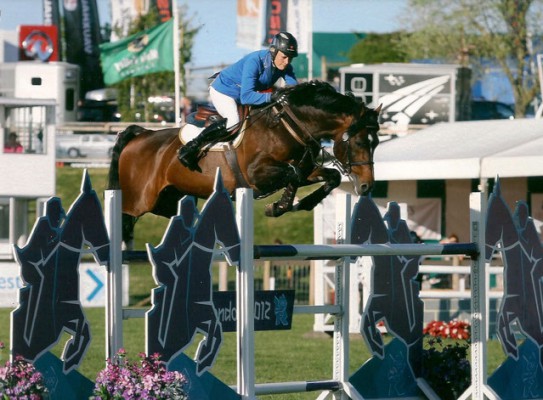 Mr Visto is in the news; this Carron Nicol Show Jumping Stallion is Graded Elite AES  and a Silver Elite BSJA Stallion  who has already won over £7,000 and is well placed in the BSJA Horse League.

Mr Visto has all the well made good looks of a show jumping legend in the making.  He has certainly inherited his looks and ability from his sire Levisto, along with his easy temperament and, apparently, unruly mane!

Mr Visto is consistently successful in the arena and took the ribbons at The International Stairways and International trials at 1.55m level and was placed in The Queen Elizabeth Cup. To date he has a purse of over £7,000.00 Which is outstanding in horse his age jumping at this level.

One of the things that is  striking is his ability to take everything in his stride says Carron Nicol of her sisters’ Showjumping Stallion, Mr Visto.  “He has not ever stopped”, according to Carron, even taking his first encounter with The Dyke like any  other jump in the arena.  Carron is hoping  that we will see the pair of them at the Horse of The Year Show, just a few months away.

Caron Nicol aims for her Show Jumping Stallion? The Hickstead Derby…. Although she is thinking they might practice “the bank” first!

Carron Nicol says she has no doubt that he will make an Olympic Horse.  Carrons’ word on this is pretty much a sure fired bet.  She is one of the UK’s top show jumping producers and has 35 years of experience breeding, importing and producing horses through her very successful company European Sports Horses Limited which operates from the Rummer Stud in Warwickshire. Carron herself is a professional competitor in the international arena and, on Wednesday last,  she Won the National Ladies Championship at the Andrew Bowen Indoor Arena in a hotly contested final with 28 competitors with two double clears in an impressive 39.02 seconds on Mr Visto, at National Agricultural and Exhibition Centre (NAEC) in Warwickshire.

Mr Visto, this talented Carron Nicol Show Jumping Stallion,  is passing on his agility and athleticism to his progeny who are already proving themselves in the show jumping arena with his four and five year olds now competing.

Fantanland see his stallion listing on our Horse Scout Wesite

And with 8 yearlings and 2 year olds with some brilliant jumping lines (Accorado 1, Darco, Lux, Pilot the list goes on) we shall be seeing many more of his progeny on the international circuits in the future I have no doubt.

Levisto, a Grand Prix show jumper, competed at the World Cup Final for Sweden then in 2009 was on TheTeam GB team at the European Championships  in 2008. A hugely successful show jumper campaigned by Judy Anne Melchior over a 7 year career at Grand Prix, and he stayed at the top of his game through out.   Levisto is by Leandro /Langraf 1 and x the Grand Prix mare Chica Bay (Hirtin). His dam line by Ariadus/Acord 11. Its interesting to note that On his 3rd dam line is the AES/SHB_GB Elite Event Stallion Carousel an event horse sire. His linage connections have proven performance horses through out with some of the best bloodlines available.  He would not only make a super match for a show jumping pedigree but also work well as an improver line for eventing, and his temperament is a bonus particularly for those wishing to produce a quality riding horse.

To find out about this super talented Carron Nicol Show Jumping Stallion or to use him for your mare next year follow this link to his Stallion Profile Page on Horse Scout.

Oldenburg Stallion at Stud in the UK: Serano Gold