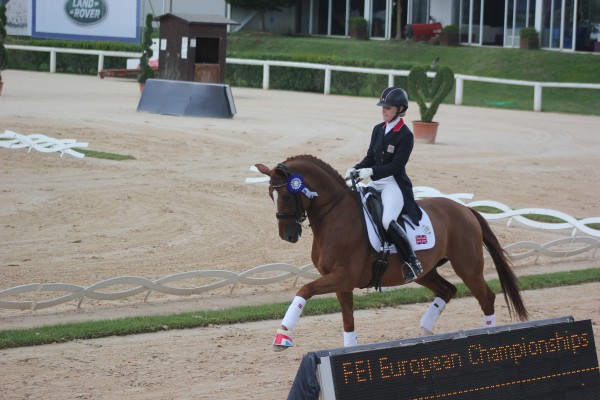 She is an International Dressage Rider and has been a British Equestrian Federation World Class Squad member since 2010. Olivia Oakley has represented Great Britain in 5 European Championships since 2010.

As a top ranked dressage rider and a UKCC accredited level 2 Instructor, she regularly holds clinics all over the UK and is available for weekly lessons from her base in Breadstone, Berkely. We have a link to her profile page below.

One of the most valuable things for  professional dressage riders, or any professional rider, is to secure sponsorship which helps increase their profile and that of the sponsor. Recently Olivia Oakley gained a valuable sponsorship from Caldene. Their Marketing Director, Rachel Bowles, was not short of the mark when she described this rising star (who is still under 25) as “a true British Talent” who “shows great strength of character, passion and a true dedication to the sport”.

Olivia is competing at this weeks Hartpury Festival of Dressage on her handsome DiMaggio gelding Donna Summer. Donna Summer, whose stable name is “Rio” was born in 2001 is out of the State Premium mare Belinda stands at 15.3hh. Owned by Kate and Olivia Oakley he does not let size make the slightest difference to his big presence in the arena.

You can see Olivi Oakley compete on Donna Summer in the Baileys Horse Feeds BD Intermediate II (Supported by Monarch Equestrian) at 13.57 on Sunday the 12th July 2015.

Horse Scout is pleased to sponsor the Horsescout.com FEI CDI Prix St George on Friday Morning at the Hartpury Festival of Dressage.

Olivia took on Donna Summer (Rio) as a very green 5 year old and has used this as a learning curve to produce this lovely horse as an established master of the ring in just a few short years.  They established their competitive relationship in 2007 in the affiliated arena with 140 odd outings since 2007. Olivia says he (Rio) is not past sulking if her attention is not focused on him. He has a big personality; something which makes him a crowd pleaser in the arena, with the judges and with “his Public”! And on occasion he is undoubtedly a bit of a clown!!! (have you ever seen the bloops from Carl Hester at Home!) If not…. Well you definitely should. Donna Summer looks every bit like he’s auditioning for River Dance…!!

Donna Summers’ Sire DiMaggio (by Weltmyer) is a hugely successful Hanoverian Sire his progeny are in the record books consistently across all years since his first crops with 45 qualifying progeny in the BEF rankings placing him 2nd in the All Time Sire Rankings with the British Breeding Federation (2007 – date) DiMaggios’ own averaged Score comes out at 9.36 from his top 5 scores.

Of Dimaggios’ progeny namesakes Dimaggio Chillis Dino has been campaigned by Lord Leo Cornford. Last year competing at Novice, now with 4 points, and only once out of the top 4.  Who, on his 4th  British Dressage  event has qualified for the Sheepgate Tack & Togs 2015 Championships! Dimaggio Delight competed by Rebecca Whitcombe taking 1st place at AM in the last five outings.

Dimaggios’ performance progeny carry his stamp and are well priced in the market for the potential they hold in their genetics.

Horse Scout has a Dimaggio Mare listed on its horses for sale pages.  She’s a nice looking animal with a good write up who would fit well with a rider aiming to compete.  Her profile can be found under Domonique Dancer

Olivias other top horse is of course Don Carrissimo on whom she has been hugely successful. Taking the ride in 2014,  Don Carrissimo is a 16.2 hh Don Crusdaor x World Cup III gelding owned by Anne & Steve Keen. With 15 wins in 23 starts its an impressive record and an indication of just how strong this partnership is.  Olivia Oakley has achieved her personal best score of 74.39% on Don Carrissimo in the FEI Inter 1Q in May this year. They have also qualified for the Premier British Dressage League National Championships in September following their win in the FEI Inter1Q at Wellington, and now have 3 Regional titles. With impressive results at in the Charles Owen AMO Winter Championship 4th (69.87%) on Don Carrissimo and 5th in the Superflex FEI Inter I Freestyle Winter Championship 5th with Donna Summer (72.29%) with a captivating performance which matched the score from Matt Frost with AMD Don Rosso II.

Horse Scout wishes all the best to Olivia over the coming weekend and of course for the rest of the 2015 season with all her horses.

HORSE SCOUT is a social, sales and promotional platform that allows members to buy or sell horses, explore the online equestrian world and build a network with professionals and businesses across the UK. Create your own personalised profile for free, connect with our online community and start advertising your horse or business today!