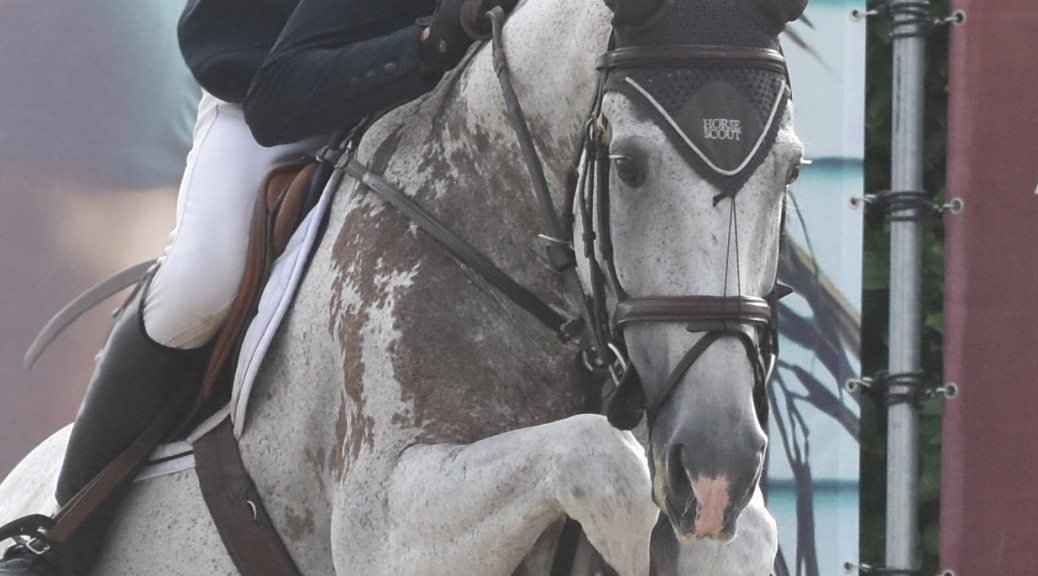 Steven Franks –   With over 15 years experience in producing horses to Olympic and Grand Prix level, Steven Franks reveals his top tips on training his horses and buying a show jumper.

When did you become serious about show jumping?

I was 17 when William Funnell spotted me at a show and said I should work for him if I wanted a career in show jumping. I ended up staying with him for seven years. At the beginning I was riding his young horses and, as the years went by, I got the opportunity to ride some of the more established ones and to carve out a career.

Back in the day… riding Cevin Z at three Horse of the Year (HOYs) finals and placing at a few international Grands Prix with Mondriaan.

More recently, since setting up my own business, coming second in 2015 at the Hickstead Derby on Carlow Cruiser and second in Spain at the three-star Grand Prix with Brutus III. He was a winner at CSI Bolesworth with Billy Ginger as well as winning the Area Trial at Edenbridge County Show.

Tell us a bit about your horses.

I have three horses with double clears at International Grand Prix:

Brutus III (by Billy Congo) is a really special 10-year old who has jumped nine world ranking classes on the trot without dropping a pole.

Carlow Cruiser (by Cruising) is a veteran at 18! He is a 16.2hh grey gelding, with incredible ability but is a menace in prize givings.

Then I have Holly Congo (by Billy Congo) who at nine years old is winning 1.40 classes, as well as Billy Ginger who is the winning machine.

I also bought Brutus’ brother, seven-year old, 17.2hh Amethyst. He is currently jumping Fox Hunter classes. I don’t like to work big horses hard when they are young as they are simply too weak — it’s important to work on getting a good canter. And no… 1m30 isn’t big for a horse that size!

Are they for sale?

Every one is for sale but they’re not pushed under people’s noses.

How do you keep your horses sound and happy?

I place an emphasis on keeping them fit for the job but not over jumped — the fitter they are, the less likely they will pick up an injury. If they are established and competing, I hardly jump at all at home and, even then, it’s no bigger than 1m30. It’s purely to keep their jumping muscles strong. The younger horses (under seven) will jump more in order to improve their technique.

So what’s a weekly schedule for an established horse like Brutus?

Five days week they’ll be out in the field for two hours and they will be hacked three times a week. I will also work them in the paddock three times a week – I find that the sand school disguises a few things but in an open field there’s nothing to help you with straightness!

Do you use any training tools or favour any specific bits?

My motto is generally to keep it simple and most of my horses go in snaffles. Sometimes the horses with a high head carriage work with a bungee to work longer and lower and to use the muscles across their back but, in general, for show jumpers I think that if they are comfortable and happy carrying their head high or poking their nose, it’s better than forcing them to go in an outline and lean on the rider.

You now own your own business breaking and producing other people’s horses. What’s the most important thing when training a youngster?

The basics are flat work – straightness, self carriage, working forward, and being responsive off the leg and not dependent on the rider.

Can riders come to you for lessons?

In around five years time I’ll probably teach lessons, but at the moment that’s not a priority.

So do you train with anyone regularly?

In the past, of course, I’ve been trained by William Funnell and Di Lampard and if I had a problem at a show I’d always ask their advice, but no, I don’t train regularly with anyone. Most of the time I figure it out for myself. There’s no right or wrong way. Every horse is different. You just have to be clever…forever thinking.

What advice would you give other upcoming show jumpers?

I find watching certain riders I admire, such as Marcus Ehning, helps. And often it’s more beneficial to watch them in the warm up rather than the ring.

The most important thing is intelligence and a big heart. I’d rather they had less talent and a heart of a lion than be ultra talented and only give 80%. Whether you’re an amateur or professional, I think buying the right horse is down to gut instinct – look at a horse, get on and try it. Sometimes what you are looking at on paper simply doesn’t translate when you ride them.

So do you think blood lines are important and which ones do you like?

Yes it does count — I have three horses by Billy Congo: Brutus III, Holly Congo and Billy Ginger.

But my other favourites are similar to most others… Diamant de Semilly and Kannan.

What are your goals for the future?

To keep some young horses coming through so that we can keep going to the top shows. Keep the form and success up so that we can continue to climb the world rankings. Winning a Grand Prix and the Hickstead Derby, now that would be nice!

And why Horse Scout?

The social media side is very good — it’s so important these days to network and market yourself.

Interview by Sam Lewis Journalist and PR for Horse Scout

Visit Steven Frank’s profile page to find out more about the horses he has for sale which, at the time of writing include two wonderful youngsters ready to take the stage:

Box Clever a talented 5 year old who had a clear round in the Discovery at his first show. A handsome looking gelding by Box Clever – follow this link to his sales page.

Steven also has a talented homebred mare by  Adorado x an Animo Nimmerdor mare who is winning with double clears in Newcomers ready for 2017 and has also jumped double clears at Foxhunter.  A quality horse ready for a keen amateur to produce. Steven has ore information on her Horses for Sale page, follow this link.

More on Horse Scout about the stallions Steven franks mentions.

Horse Scout is the place to visit if you are looking for any of the top class stallions that Steven has mentioned in his interview.  Horse Scout really does have a top class line up listed on its Stallions at Stud pages. Visit our Stallions At Stud pages or use the links to particular stallions in the text above.

Ramiro B No2 World Ranking Stallion 2015