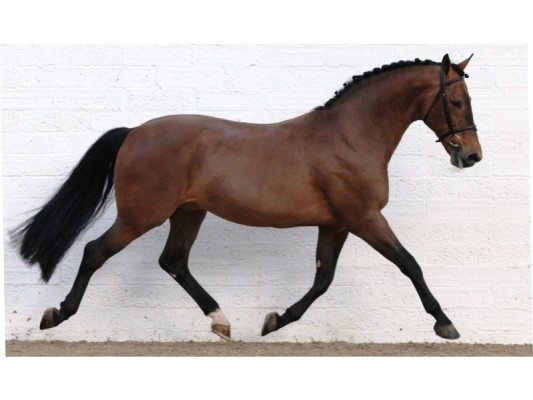 Ramiro B , the number two stallion on the World Rankings for sires of event horses in 2015,  stands at the Harthill Stud in Cheshire. He is listed as the number one  sire  on the BE rankings (2015) for  4-8 yr old horses, with a good number of offspring coming through the ranks to keep him at the top of the WBFSH list.

His linage lists some of the best Belgian, Warmblood and Holstein jumping lines. Irish rider Edward Doyle produced this lovely stallion, his successes including winning the Indoor Spring Championships in Ireland as a 4 yr old; the Dublin 4yr old final; the Cavan 5yr old final (99), and winner of a 6/7 yr old class at Cavan in 2001.  He has continued successfully in his competitive career and now stands at stud where he is proving a productive and effective stallion.

Horse Scout has several Ramiro B Connections, including Horses For Sale.

Irish Sports mare Violetta is ready to back, this 2013 Irish Sports Horse chestnut mare stands 16.00hh and is already looking very well made, standing well on her four legs.  With Ramiro B as her sire and with Carnival Night on her Dams side she has exceptional jumping lines.  With a view to a show jumping or eventing career in front of her she is 60% TB lending agility and speed to her good looks she is sure to do well.
You can find her full profile information on Horse Scout by following this link
Ramiro B has also sired a super young event horse who is for sale from Whinney Hill.  Her producer, international rider James Adams, thinks she has the ability to really progress on the event circuit as she shows genuine ability and technique.   At 15.2hh she is a good height for a rider coming off ponies or an adult looking for a smaller ride but who still has all the scope.
Jamiro has a profile page on Horse Scout and details about her for sale particulars can be found by following this link.
James Adams is a successful Event Rider and producer who holds clinics in the Stockton area also takes horses for breaking,  and  training livery.
His profile page gives information on horses he is producing and you can follow this link to find out more.
Cooley Master (v. Ramiro B)  is campaigned by Oliver Townsend who describes this horse as super talented.  Find out more about Ollie Townsend’s competition horses on Horses Scout and keep in touch by following his progress.
Another Ramiro son will be for sale on weaning.  he looks fantastic.  you can contact his owner Linda to find out more by following this link to his Members Horses Profile page on Horse Scout
Previous article