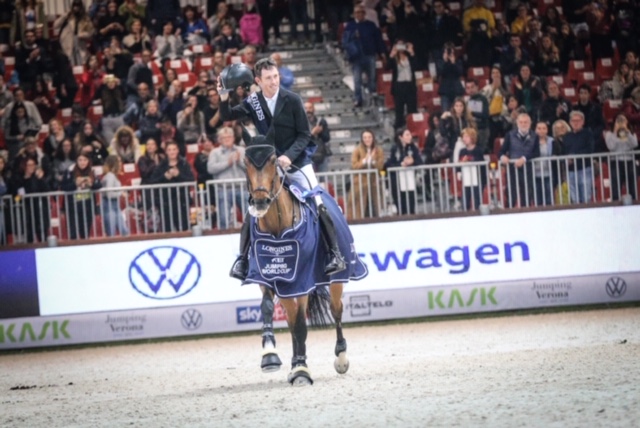 Scott Brash restored British showjumping hopes after winning the Longines FEI Jumping World Cup in Verona. Riding Lady Kirkham’s Hello M’lady, the Scotsman jumped the fastest clear round in the jump off to claim the title, in a strong field including World Number one Steve Guerdat.

“This means a lot and I am delighted with my horse” said Brash who heralds from Peebles in Scotland. “M’lady is a fantastic horse but a delicate mare. She can get a little stressed with the atmosphere so it took me a bit of time at the show just to get her to relax but her talent showed through today. She also jumped at the European Championships to help qualify Great Britain for the Olympics “.

Brash was on the team which won gold in the London 2012 but Britain’s success at team championship level has since been erratic. The 34 year old has also occupied the limelight less frequently of late, for a man who has been top of the world rankings more than once and was the first rider to win the Rolex Grand Slam, showjumping’s most lucrative prize in 2015. In a sport where you are only as good as the horse you are sat on, Brash has lacked the horsepower after many of his top horses have been retired or off with injury. Despite a prolific career, he is not yet qualified for Tokyo

Olympic ambitions are what motivates Brash. He has aimed for the World Cup Series to increase his chances of Olympic selection and with it, another gold medal. Whilst Britain has qualified for Tokyo, he needs to gain enough FEI points in order to be considered for a team or individual place. “The Olympics is on my mind. M’Lady is going to be one of my strongest contenders for next year. She has been off for quite a while through injury sustained a few years back but it is nice to feel her competitive at the top of the sport again. I have high hopes for next year”.

Subjects and opinion from the World Horse Welfare Annual Conference: Part I