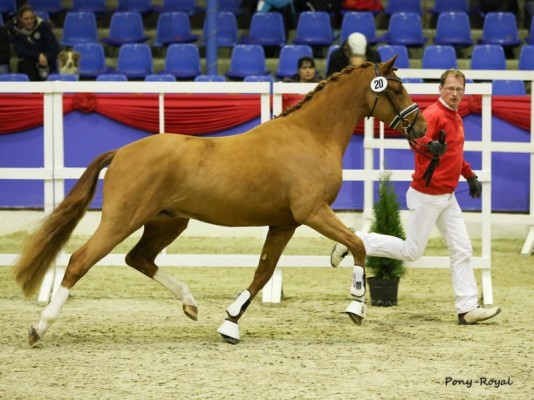 Chartstürmer WE is a newly licenced 4yr old stallion who achieved a premium status.

He has an exceptional temperament and is from renowned German champion bloodlines.

Sire:CARAMEL FH – Caramel was the champion stallion at his hannoverian licencing in 2010, he then went onto win the Bundeschampionat of 3yr old Stallions in 2011 with scores of 9s & 10s in 2013 as a 5yr old he won a Bundeschampionat Qualifier with 8.6 and with a score of 8.49 won his stallion performance test, with 12 victories in 12 starts caramel continues his story book career. Caramels father CYRIAC WE was licenced from weser Ems in vechta 2003,in 2004 won final qualification at the bundeschampionat for 3yr stallions, he won a total of 12 young horse tests, he was state champion in Rastede and federal champ in warendorf of 4yr stallions,2007 cyriac was champ of weser ems stallions, in 2010 was sold to USA, caramels mother St.Pr.El.St Golden Deern was reserve champion of weser ems elite mare show in 2002 Hude and 4th in the Bundeschampionat.

Dam:St.Pr.st Greatest Hits – is an elegant mare with an excellent breeding pedigree, she was broken as a 3yr old and in 2010 qualified for the weser-ems elite mare show in Hude where she achieved a rideability score of 8.5 and gained her state premium status , her other 2 foals have also been awarded state premium status in Germany she has since moved to Great Britain and is now based at the Knightswood Stud in Cornwall.

Dam Sire:Fs Golden Highlight was champion stallion at his licencing in 1999, in 2000 he was champion at Rheinische Meisterschaften and at the German national championships, in 2001 he won federal champion, in his performance test he was given 10, in 2003 at the international welsh show in aachen he won all his classes and was supreme champion, his father FS Golden Moonlight was federal champion and his grandfather Golden Dancer was multiple European champion.Performance: