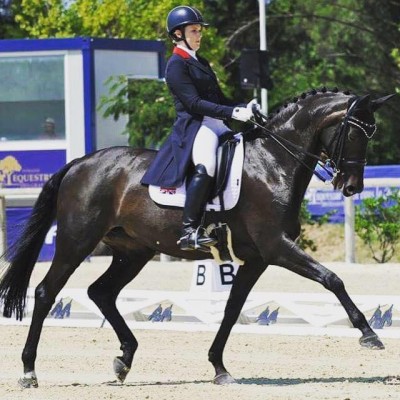 Charlotte is continuing in the family footsteps at Catherston having finished studying for a British Dressage Apprenticeship. She has also passed her Advanced Apprenticeship in Sporting Excellence at Hartpury College.  Charlotte started her equestrian career in the Pony Club and with Equestrian Vaulting where she was 5th in the Junior Selection Trials as an Individual.  A member of Hampshire Equestrian Vaulters and the English Vaulting Squad she also competed in Team and Pairs.  Riding Catherston Bit of Gold she was Junior Champion and Overall Supreme Champion at the NPS Dressage Championships. She was a member of the British Junior Team at the 2015 European Championships in Vidauban, France, with Ian McRobbie’s Sabatini when she made the historical first by being the third generation of one family to represent their country at the European Dressage Championships. She again was in the Junior Europeans at Oliva Nova, Spain in 2016 and following a year out training was selected for the Young Riders Team in Fontainbleau, France in 2018 where she was the leading British Rider in the Team Test.  Charlotte is also bringing on the first crop of Timolin 4 year olds under saddle and is eventing some of the older horses too.