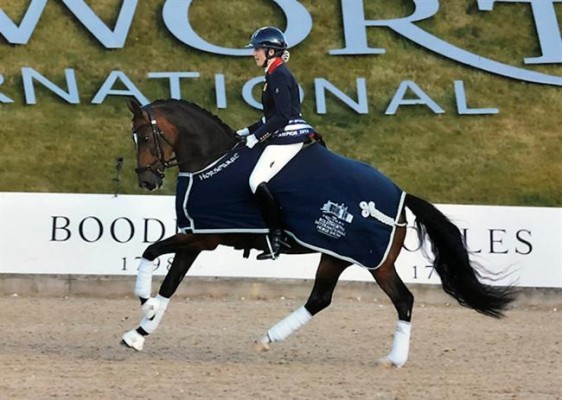 Competed on the British team at the 2017 & 2018 European championships.
In 2017 Star was part of the bronze medal winning team & in 2018 where the team came 4th.
Prior to this Star was direct reserve in 2014 & 2015 with Rebecca Bell.
So far in his career he’s represented GB at 19 internationals with many top 3 placings

The Ultimate proven schoolmaster with many more miles in the tank who still has much more to give and the ability for even better scores.

Stars results speak for themselves, with an outstanding FEI & BD record, consistently scoring over 70% at international competition with his PB in the team test of 71.9%, the individual at 73.8% and the music 73.9%

His 2018 internationals have been limited due to his riders’ exams but he achieved his PB in the team test at Joosland finishing 2nd, won both pony classes at Bolesworth international and achieved many 70%+ scores at BD shows and premier leagues.
Results from 2018 include:

We have owned Star for 3 years and he has taken Megan from competing at Novice level to European championships in this time with their first international only 6 months after she started riding him.
Star loves to work and always gives his all, he enjoys hacking and popping over a few jumps, and is a poppet around the stables being trusting and loving.

He is the most straight forward genuine pony. Completely sane, sensible and safe both at home and away which makes him more than suitable for a smaller less experienced ambitious child wanting to learn the ropes and achieve great results or equally is fit and ready to take another child straight to international success.

He travels brilliantly whether it be a local show or travelling for several days. Comes off the lorry just the same, never sharp or silly and has competed in some huge atmospheres taking them all in his stride.

He has become a hugely important part of our family having given us so much and we want him to go to a home where he can take another child all the way in a loving, caring environment.

Only for sale as this is Megan’s last year on ponies.