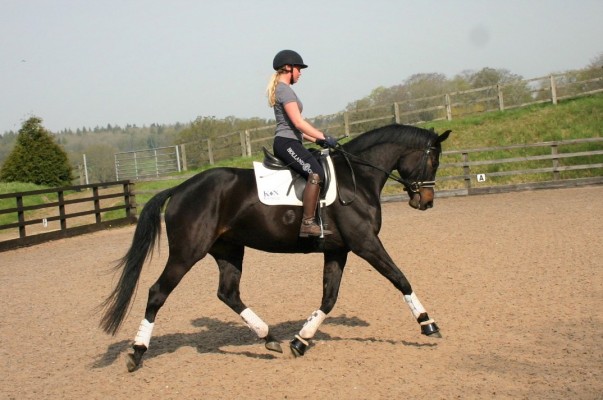 Sammy Seagry is a dark brown 4 year old mare by Furstenball. She was an Embryo Transfer foal out of our amazing FEI Advanced mare, St Pr St Seagry Sanay. Sammy is a compact, powerful young mare. She is remarkable for her age, so willing to please and trainable. Although she has a lot to learn she is well balanced and a very comfortable ride. There is never any fuss, she just gets on with her work. She has already a lot of what will be needed to train the collected work and a lovely jump in her stride, a natural base for training pirouettes and changes. As a foal she was already recognised as exceptional, she scored 9.2 at the BEF Futurity at Hartpury in 2015 and was the highest scoring horse of the day earning an Elite First Premium. She was the 8th highest scoring horse of the entire series in 2015. Over 560 horses were graded during the year (foal to 3 year old across all disciplines). Sammy is the second foal from her dam to earn an Elite First Premium. She was also an Oldenburg Premium foal.

Dam: Hanoverian State Premium Mare, Seagry Sanay is a truly outstanding mare that we bought at the Hanoverian Elite auction in 2012. She was a finalist in all 6 British Young Horse classes in 2013 and representing GB, was 3rd in the FEI CDI Young Horse Final in Vidauban (France) 2013. In 2014 she was 3rd in the British National Young Horse Championships at Hickstead beating some of Britain's top 6 year old horses. She was nominated to represent GB in the World Breeding Championships in Verden. She won the Hickstead PSG Premier League show in 2017 and earned a direct qualification to the Nationals in 2017. She was ridden and trained by the gifted Charlie Hutton, and is currently being campaigned by the talented Young Rider Abbie Newbury.

SIRE: Fürstenball is a hugely popular breeding stallion. He is renowned for stamping his offspring with the most wonderful, trainable temperaments, magnificent broad heads and wonderful top lines. He also passes on excellent, high quality paces. He is a champion stallion placed in the top of the German breeding index for dressage horses. He has already sired 65 licensed stallions including Fursten Look, Follow Me OLD and Furst Fabrice, to name but a few, and over 120 State Premium mares including Heilines Danciera, Fiesta Danza OLD, and many more. Year after year he presents top foals which often produce six-figure prices at German auctions. Fürstenball inherited many of his qualities from his father, the world champion Fürst Heinrich and his grandsire, the breeding icon Donnerhall.