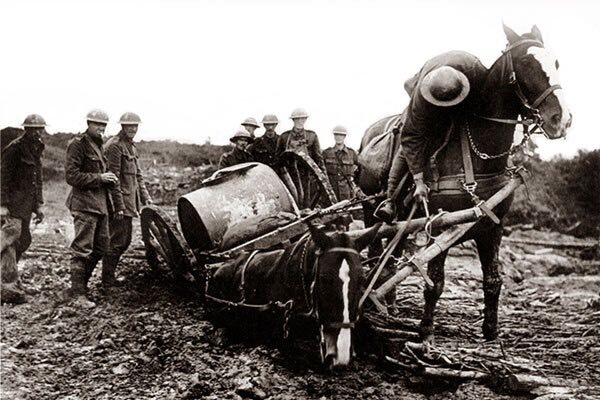 11th November 2018 marks 100 years since the end of World War One. Also known as the Great War, it remains one of the largest, deadliest conflicts in history with an estimated sixteen million people dying as a direct result of the war. Whilst we remember the men and women who fell this Sunday, we might also spare a thought for the eight million horses and countless donkeys and mules who died whilst serving the war effort.

These animals died not just from shellfire but also suffering painful deaths from wounds, starvation, thirst, exhaustion, disease and exposure to terrible weather and appalling conditions from freezing mud on the Western Front to the oppressive heat of Tunisia, Eritrea and Burma.

Initially, most of these horses were used as cavalry horses as they had been for thousands of years. But their vulnerability to modern machine gun and artillery fire meant their role changed to transporting troops and ammunition. At the start of the war, military vehicles were relatively new inventions and prone to problems, which meant horses and mules were more reliable, cheaper forms of transport.

Many of these animals were used to transport ammunition and supplies to the troops as well as the sizeable field guns. It would take six to 12 horses to pull each gun. Sources also show that Dummy horses were sometimes used to deceive the enemy into misreading the location of troops.

Beyond the horror of war, there was some animal welfare in place. Vets treated 2.5 million horses and two million of those recovered and returned to the battlefield. The British Army Veterinary Corp hospitals in France alone cared for 725,000 horses and successfully treated three-quarters of them. A typical equine hospital could treat 2,000 animals at any one time.

Well-bred horses were more likely to suffer from shell shock and be affected by the sights and sounds of battle than their less refined compatriots, who could be taught to lie down and take cover at the sound of artillery fire. Records show that one-quarter of all deaths were due to gunfire and gas; exhaustion and disease claimed the rest.

During the war, horse food was the single largest commodity shipped to the front by some countries, including Britain. The manufacturers of Quaker Oats put in a bid to supply army horses with cakes baked from oats and molasses, but this proposal was dismissed as too extravagant.

Back on the Home Front, some owners took drastic measures such as putting their animals to sleep before the army could seize them to avoid their horses facing the terrible and terrifying conditions at war. War Horses were considered of such value that is a soldier’s horse died, he was required to cut off a hoof and bring it back to his commanding officer to prove that the two had not simply become separated.

In a single day during the Battle of Verdun in 1916, 7,000 horses were killed by long-range shelling on both sides, including 97 killed by single shots from a French naval gun. Losses were particularly heavy among Clydesdale horses, which were used to haul guns.

Over the course of the Great War, Britain lost over 484,000 horses- one horse for every two men. Yet many more were left or sold off in the places they served for an even worse fate than death- a life of hard labour and torment. It was whilst living in Egypt in the 1930s that a British woman named Dorothy Brooke was struck by the number of Allied war horses and donkeys who had been sold to be workhorses in Cairo. Nearly all were emaciated, old and worn out. She wrote a letter to the Morning Post (now the Daily Telegraph), exposing this reality. It moved readers so greatly that they sent her the equivalent to £20,000 in today’s money to help end the suffering of these noble beasts.

Within three years, Brooke had purchased five thousand ex-warhorses. Most had to be humanely put down to end their suffering but they at least ended their lives more peacefully than would otherwise have been the case. In 1934, she founded the Old War Horse Memorial Hospital in Cairo with the promise of free veterinary care for all the city’s working horses and donkeys. Soon after The Brooke charity was established and has been a leading force in helping working animals and their owners in the developing world.