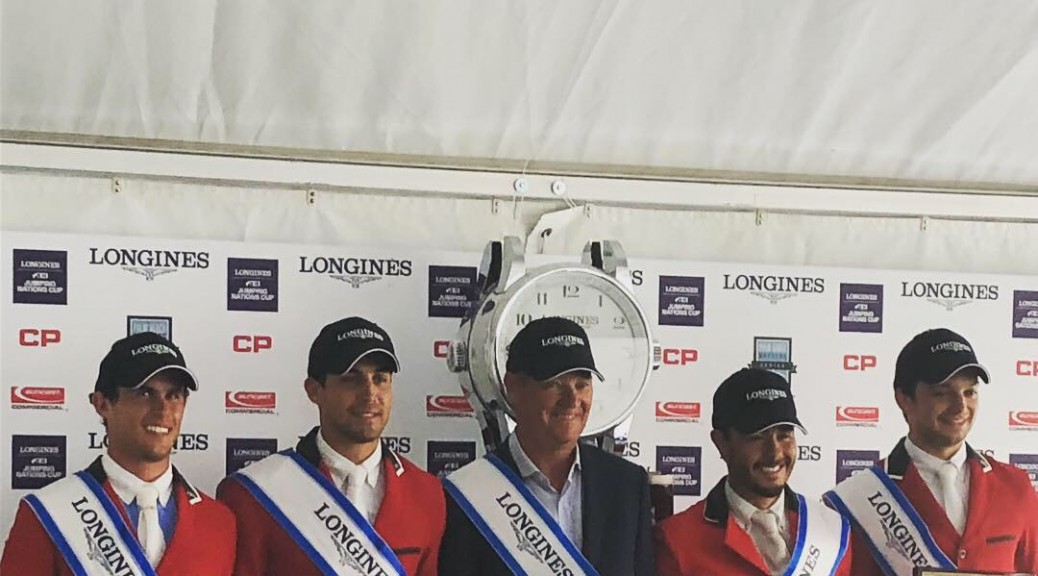 In any sport when the underdog wins, it makes for great entertainment. So when the Mexican team took a decisive victory in the very first leg of the Longines FEI Jumping Nations Cup in Wellington, Florida the press conference was a joyous affair.

The youthful foursome fought off some of the world’s most successful nations including the USA, Canada, and Ireland. In fact, it was the youngest two Mexican riders with the least team experience who sealed the deal with their double clear performances. These came from 23-year-old Eugenio Garza Perez riding Victer Fin DHZ and 24-year-old Manuel Gonzalez Dufrane on the athletic grey mare Hortensia van de Leeuwerk. The other two riders played their part with low-faulted rounds from Fernando Martinez Sommer (29) on Cor Bakkar and Juan Jose Zendejas Salgado (25) riding Tino la Chapelle.

Tryon’s FEI World Equestrian Games™ 2018 course designer, Ireland’s Alan Wade, set a track that tested rideability, and the final line of a one-stride triple combination to big oxer proved the undoing of many. However with three first-round clears the Mexicans were already in command at the halfway stage on a zero score, trailed by Ireland and USA on eight, Israel close behind with nine, last year’s Wellington winners from Canada on 12 and the three-member Colombian side already trailing the field with 16 on the board.

The Mexican quartet kept a cool head and clung on to their lead in the second round, which caught out a number of the world’s leading riders such as World No 2 Mclain Ward and Beezie Madden who both faulted. Fernando Martinnez Sommer commented on the technicality of the course. “The course was difficult enough, for me my horse has a very big stride so I had to go a bit steady all the time.”

All four riders were quick to praise their Chef d’Equipe Constant van Paesschen, not just for their Nations Cup victory but what he has delivered to Mexican showjumping during his short career so far. Stany van Paesschen had similar positive words “From when I came two years ago, I said I am going to try as much as I can to push some young riders forward. We have some great young riders but we also have some great support from professional and older riders. I think we have a great team.”

Garza Perez, who trains with legendary Irish rider Eddie Macken and is the only member of the Mexican side to be based in the USA, said: “Today’s result is a testament to the quality of the next generation of young Mexican riders.”

He was a member of the historic site that posted that spectacular win in Dublin last August. “That day was an inspiration to us all!” he pointed out. And now the main Mexican goal is a place at the Longines FEI Jumping Nations Cup Final 2019.

“There’s an Olympic place on offer in Barcelona and we intend to take it!” He said.

Team Israel had a great show too. Daniel Bluman’s double-clear with Ladriano Z bolstering an impressive all-round performance that saw them add nothing to their first-round nine-fault tally for the second spot. The Americans looked strongest at the outset, with an extremely experienced team of Beezie Madden, McLain Ward and Laura Kraut joined by young star Lucy Deslauriers. But single errors proved costly, so they will be hoping to turn the tables when their regional League moves to Mexico next time around. Only Mexico, USA, and Canada were entitled to qualifying points in today’s competition, so they claimed 100, 80 and 60 points respectively.

OUTBREAK OF EQUINE FLU COULD CAUSE COMPLETE LOCKDOWN OF EQUESTRIAN SPORT