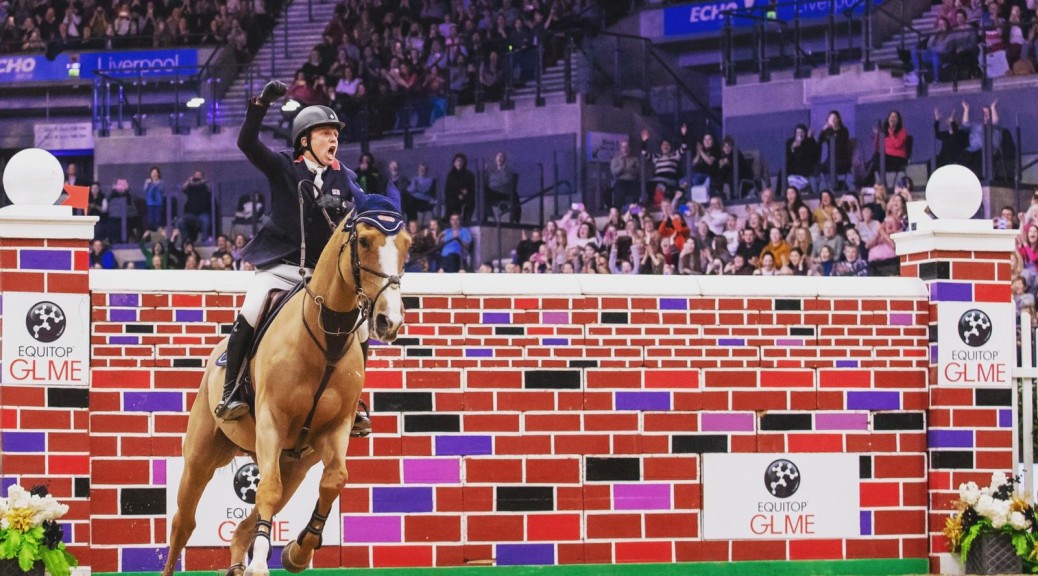 The Puissance is the ultimate test of horsemanship. It measures bravery, scope and the ability to hold your nerve. It is an event that never fails to fill seats and excite a crowd and cause a stir. This year’s Puissance at Liverpool International unfolded like a fairy tale and the end to a great year for British rider Matt Sampson, who finished in joint first after clearing 7ft 3” (2m20). Not only was he a relative rookie against the big red wall, but he achieved the feat with a horse he was riding for the very first time- Laura Renwick’s Top Dollar VI.

Eleven combinations competed which ran for the maximum five rounds. It was whittled down to just two in the final round with Matt sharing the honours with Irish youngster, Michael Pender. Michael was riding the scopey mare Hearton du Bois,  with whom he won the Dublin Horse Show Puissance this year.

Matt’s catch ride, Top Dollar VI may have more experience than his rider, having jumped a number of Puissance classes with Laura. In fact, the pair won the class at Olympia in 2017 but Laura decided to hand the reins over to Matt less than an hour before the class. That being said, to take on any new horse before a class and win it, is one helluva feat. Let alone to put faith in one another to jump the unjumpable.

Matt reveals how he prepared himself mentally for the challenge:

“I didn’t know him at all but maybe that’s not always such a bad thing. I just tried to ride forward to it and give him a little bit of room because he’s such a big horse. You’ve just got to keep them confident but then he’s a very good horse. It got easier each time as I just figured him out and trusted him a bit more and it just went on from there.”

So what does it feel like jumping that wall? “It feels amazing” he smiles. “I’ve actually only done one Puissance before at a show in Holland. So I didn’t have a lot of experience in the class.”

Preparation outside is minimal he explains. “It’s very hard to prepare in the warm up to jump a wall. Because we don’t have a wall in there, we just have a vertical and an oxer. I did a couple of verticals and an oxer but only about 1m40 to 1m 50 high. In comparison to what we are jumping in the arena, it’s not a lot but I think it’s better to keep the horses confident so if they go in the ring thinking that they can jump it, then it’s got to give you a better chance.

About an hour before the class, Laura (Renwick) rang me and asked me what I was doing and I said “nothing”. So she said did I want to ride her horse in the Puissance.

When asked if he had many catch rides in his career. He responded humbly with “not really”. Until legendary jumper Geoff Billington interjected with “he’s the King of Catch rides this one” referring to Matt’s win in the Hickstead Speed Derby on a catch ride Top Flight True Carlo in Hickstead’s Derby meeting.  In May, Matt had the biggest win of his career when claiming the prestigious Hamburg Derby, aboard Gloria van Zuuthoeve.

Whilst it is apparent, Matt would love to ride the gallant chestnut, Top Dollar again, he is philosophical about it. “I don’t know if it will happen again- probably not. But if I don’t ride him again, it was a good way to end on a high. He jumped amazing and it filled me with confidence.”