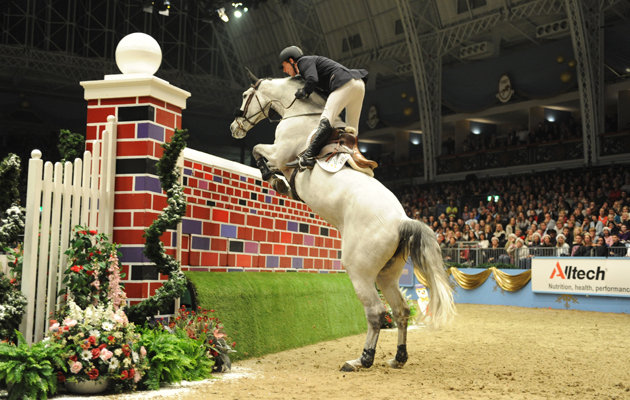 A History of the Puissance

It is a leap of faith that requires the most extraordinary levels of trust between horse and human. If you have ever ridden down to a big fence you know that feeling- a mixture of excitement and adrenalin coupled with fear and trepidation. So jumping a 2.13m (7ft) wall whilst a crowd of thousands sit motionless, takes a certain kind of mind set, that of Horse Scout professionals!

Essentially a high jump competition, the word “Puissance” was derived from the Anglo-French word meaning “power” which also reflects the requirements of a good Puissance horse, together with a large dose of pluck and trust in their rider.

Today’s Puissance competition is essentially the development of a horse high jump competition which began over one hundred years ago. Historical sources suggest that the event was contested once at the Olympic Games in 1900. Whilst the original version involved jumping a single, slightly sloping fence made from a hedge topped with timber rails, today the formula consists of “the wall” built of hollow red bricks made from wood. This is for safety reasons so that they tumble easily when the jump is knocked.

The World Record was set in 1991 when German Rider, Frank Sloothaak aboard Optiebeurs Golo, jumped 2.38m (7ft10 ins). Until that it was Nick Skelton who held the record which he achieved in 1978 when he and “Lastic” jumped 2.31m (7ft 7 ins) at Olympia. Nick still holds the Olympia Puissance record to this day. However records suggest that the record for the equestrian high jump stands at 2.46m (8ft 1ins) was achieved by Captain Alberto Larraguibel Morales in Chili, in 1949.

At The London International Horse Show,  the class involves a maximum of five rounds- the first round followed by four jump-offs. Accuracy, power and nerves of steel are key and there is certainly no room for even minute error for horse or rider, when jumping such colossal fences. There is always at least one other fence placed in the arena so riders jump a “warm-up” fence before coming to the great wall. The starting heights can vary and for the subsequent jump-offs, the jumps are raised for each round. The winner is of course the horse and rider who jumps that famous brick wall at the greatest height. In the event of equality after the fifth round, riders share first prize and sometimes riders choose to bow out gracefully whilst they are equal first and share top spot with their rivals. First prize is worth £20,000 so it is taken very seriously.

Robert Whitaker has won over 20 Puissance competitions and 13 consecutively on the impressive chestnut Finbarr jumping over 2.26m (7ft 5)ins  on one occasion in Dublin. “To win any class at Olympia is fantastic but I think the Puissance is even more special.” Says Robert. “It’s a class the crowds love, Finbarr was particularly popular because he’s this big horse with an even bigger jump. Although he certainly had his own style and technique jumping that wall.”

Robert and his horse Waterstone hold the record for bare back puissance clearing just under 2.1m (7ft). “It was one of those occasions where everything just went to plan on the night as Waterstone had never jumped a puissance before or even practised at home” says Robert.