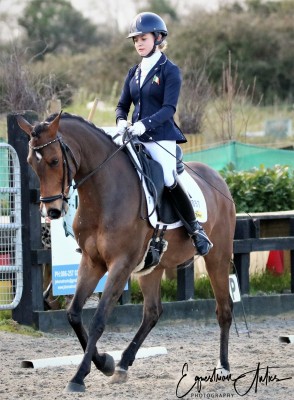 Don Quoixite III
12yrs old, FEI Pony, German Riding Pony, gelding, 148cm. Was produced as a young pony and competed by a medal winning FEI pony rider. Reserve for Great Britains pony prime squad in 2015! 200+ Dressage Ireland points, he has competed up to Pony FEI level in Ireland. Currently competing at medium level (higher than pony FEI)! Very consistent pony, recent scores of 69/70%+ at medium level! Very easy pony, ideal schoolmaster!
finished 4th in the medium category 3 (Gold)  championships at the national winter finals (only pony in the class)! Placed 2nd on day 2, list 1 judge had him 1st! Very easy and talented pony, would be a top international FEI pony in the right hands!
Don Quoixite's grandsire, Dressman I is a successful sire. His own success in sport is hard to beat. He was the 4-time Bundeschampion and multiple European dressage champion. Don Quoixite's dam line is also exceptional. His dam, Madonna is one of the most successful Westphalian riding pony dams without a doubt. She has already produced 5 licensed sons and many State Premium Mares. Her most well-known son is Don Joshi AT. He was the 2001 Vice Bundeschampion of the 5 yr. old dressage ponies, the 2002 Bundeschampion of the 6 yr. old dressage ponies with the score of 9.3, and the winner of the German Pony Dressage Derby.  Following this he had many victories in Nation Prize competitions and won the bronze medal in the European dressage championships. Del Estero NRW is also Don Quoixite's maternal half brother, whom recently won the FEI Pony Freestyle in Sint Truiden CDI 2019!
POA