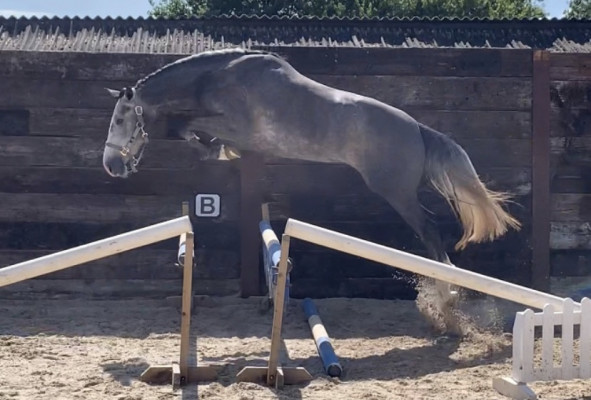 Flashy mover and naturally balanced. Has loose schooled twice now showing a perfect technique, quick and careful infront and naturally loose behind. She shows a fantastic attitude to jumping and very quick to pick things up.

Able to canter down the line, shorten and lengthen to adjust her stride, really showing everything you would look for in a relatively green to jumping mare having not been over jumped at all.

CABRIO V/D HEFFINK is a son of Cassini I, out of a mare by Calato.  Both these sons of Capitol had successful careers in sport, and have become known as great progenitors.Cassini I is best known as father of Cumano, Ingmar and Berlin (Caspar).  His brother Cassini II is increasingly popular as a sire, having produced Kassini Jack, Cassius, Cassiana, and successful auction horses such as the 110,000 euro lot Caress.Calato’s offspring include the European Champion Coster.In 2010 Cabrio had some prestigious results under teenager Oliver Philippaerts, including 3rd in the 1.45m *** Grand Prix at Arezzo, and 6th in the Grand Prix qualifier at Maastricht.  He was double clear in several 1.50 competitons, and came 2nd in the Belgian Young Rider championship.This year his career has blossomed, culminating (so far) in riding for Belgium in the Nations Cup team at Lisbon CSIO at the end of May (a selection for Cabrio and his young rider on a senior team in a competition that was a qualifier for the 2012 Olympics as well as the 2011 European Championships).  Cabrio scored one of two double clears for the Belgian team.

DIARADO is one of the most popular, and highest-ranked, stallions in Germany, and he impresses with exemplary ease at the jump, with superior scope, a willingness to perform that is second to none, manoeuvrability and intelligence; attributes that are necessary for today’s technical courses. Diarado is not only popular as a sire of show jumpers, but also as a sire of eventers; he always passes on his beautiful and correct type and conformation, which is so important for long-term soundness and durability. He is in sixth place on the 2017 BE Sire Rankings for 4-8 year-old offspring. Diarado has won several show-jumping classes; in 2010 he won the qualifier at the Bundeschampionship with a mark of 9.3, and in the final, he won the Bronze medal (with two marks of 9.0). To date, he has regularly been highly placed at advanced level, and came third in the CSI3* Grand Prix at Dobrock. He has been retired from sport for no other reason than to focus on his breeding career - he is sound and fit and still regularly appears at stallion shows.

A very exciting prospect for sport. This mare really has it all, flashy paces, bold yet careful jump and fantastic attitude, she has everything for pure dressage or show jumping but is plenty blood enough to event.. equally would make a top quality broodmare. 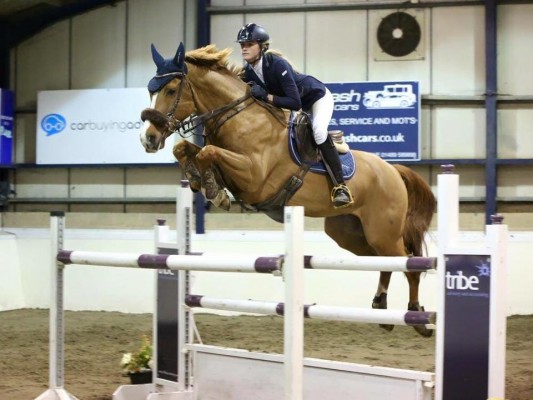