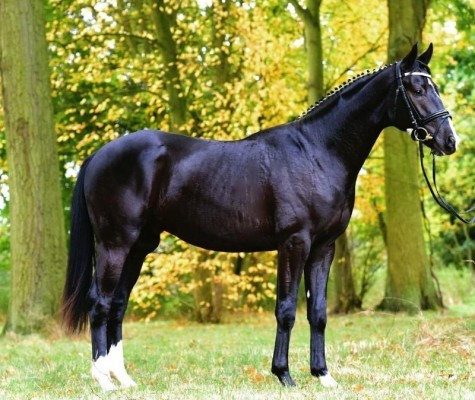 Woodlander Summertime Blues was the top 2 year old dressage horse at the British Breeding Futurity in 2014 and has also been graded with both the German and UK Hanoverian Societies and with the WBS-Uk.

I am looking forward to seeing him mature, some tension during his stallion show was evident but the judges still praised him for his great power and long lines he shows all the elasticity and expression that the judges look for. His natural elevation can be seen in his trot and he will only improve on this with training under saddle. Lynne Chapman says he also has a super canter, which is going to prove invaluable in a horse with this lovely confirmation. At his Hanoverian grading the Judge, Dr Christmann, said of this eye catching black 16.3hh Stallion that “…he was the image of his great grand dam, the mare St Pr Pikantje who was German National Champion under saddle.

Woodlander Summertime Blues’ Sire, Spörcken, was the highest priced stallion at the 2010 verden Auctions, and deservedly so. An exceptionally elegant uphill and powerful horse with an beautiful trot. His well made shoulder and forearm allowing the coveted forward, elevated and elegant gait so coveted in the dressage arena. Spörcken Is by the world famous Sir Donnerhall, himself a successful performance horse, he is sire of an impressive list of Bundeschampion offspring,. Sir Donnerhall was the five year old world champion dressage horse, with 89 licenced stallions by him and 80 state premium registered mares to his record.

La Beale Isoud,Spörckens’ dam Sire is by Lauries Crusador xx a had success on the British racing Circuit was a Hanoverian State Stallion for 23 years. He sired 2,713 foals of which 264 mares became state premium and 55 sons were licensed.

Dam Sire is the tall Elegant Grand Prix Stallion (2xBundecshampionat Finalist ) Margue H, who has a high percentage of TB in his breeding through his sire the Anglo Arab Mont Du Chantal with Florestan ii, through Mon Fleury, boosting his great modern shape., he has Cardinal XX on his Dams side. Standing for Sue Carson (Saddles) List 1 British dressage Judge, who says “…he is a powerful, handsome and willing ride” from whom his delighted owner claims, she has learnt a huge amount. Margue H Progeny are now making headlines at Grand Prix with Mystery (by Margue H x Delano) ridden by the Polish rider Zaneta Skowronska on the podium at the 2014 CDI Radzionkow on home territory.

This Uk Hanoverian Stallion Woodlander Summertime Blues has his own stallion profile page on the Horse scout website.