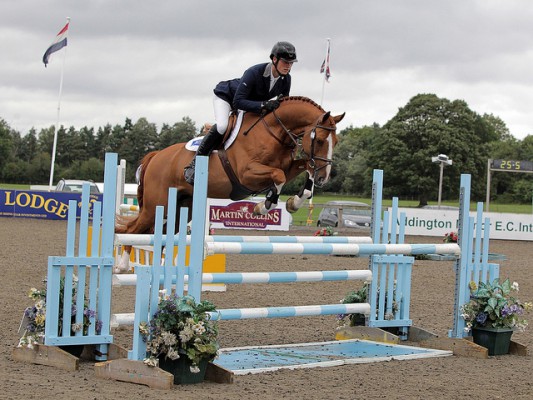 Congratulations to Pippa Funnel and Billy Walk On at Chatsworth International earlier this month.

Billy Mexico, a striking AES/AWR approved stallion, is a successful international showjumper with William Funnel has competed along side his stud duties.

Besides his own skills in the competitive arena at CSI3* CSIO5*, his progeny are also making their own mark in the performance horse world. In January, Horse Scout blogged about the successful line up for the Billy Stud at the Futurity awards where Billy Walk On took just one of the first places awarded to Billy Stud that day.

Billy Walk On is showing just why he was feted at the Futurity Awards. He is performing so well out in the competitive arena with three wins from three starts already this season. Billy Studs’ busy news reel reported in March that Billy Walk On, the lovely 6yr old by Billy Mexico, led from the front in both his novice events, firstly at Tweseldown where the section had over 60 starters, then at Aldon, Pippa rode a 24.3 dressage which then gave her breathing space in cross country to pick up 8 time faults but still finish victorious”.

He followed this by another win at Somerly Park Horse Trials. Then yesterday, the Billy Stud reports that Pippa and the Walkinshaw’s amazing 6yr old Billy Walk On have once again brought home the top honors! He won the CIC* at Chatworth international, this was his first time competing at this level. This lovely son of Billy Mexico will now have a holiday in the field before returning to competition in the autumn…. Deservedly so!

Billy Mexico has the breeding to stand by his own successful progeny through both his sire Cevin Z his sire who was was bred by the prestigious Zangersheide Stud, and carries double crosses in his pedigree of both Cor de la Bryere and Capitol I. Cevin Zs’ youngstock are achieving top class results – in both show jumping and eventing at international level. Bidorette, the mother of Billy Mexico, is a proven broodmare having produced numerous good foals, in particular the approved stallion Fervent, a proven sire who achieved over $2000.00 in winnings and also Libro who jumped to Foxhunter level, with BSJA winnings of £974.00. Libro also excels as a dressage horse with 250 points and is working at advanced medium level.

Billy Mexico is by the Billy Stud AES / AWR approved stallion Cevin Z. He is an exceptional young stallion starting his competitive career with William Funnell. He is showing huge ability, combined with an excellent temperament. His pedigree sets him apart and combined with his talent and temperament ha has proven to be an ideal producer of high class sports horses, especially show jumpers and eventers.

His first crop of young stock were placed first and second at the Young Horse Championships in 2006. He has competed successfully with William Funnell at International level. His youngstock are achieving top class results – in both show jumping and eventing at international level.

2008 was Billy Mexico’s first season at stud and as a 3yr old only covered six mares, but the crop have been outstanding. As this crop reached maturity, William said “From what we have seen of Mexico’s progeny so far we are very excited about him as a breeding stallion. Considering we only covered the six mares the first year, all the offspring have shown his super technique and great brain”.

Click here to view this stallion on Horse Scout