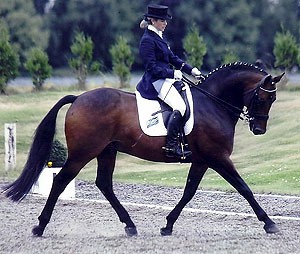 Breeders Looking for Picture Perfection in a Performance Pony Stallion: the nomination must surely go to Aimbry Chester

The perfect performance sports pony Stallion Aimbry Chester is also the eye catching face of Baileys Horse feeds and a catalogue model.  He has everything. He is Everything and he gives everything too.  The list of successful progeny on his End House Stud Biography page is awe inspiring. His family connections read as a who’s who in the performance arena in showjumping, dressage, and Eventing with their success reflected in his being graded as a lifetime Sports Pony Stallion followed by a certificate of excellence awarded by the SPSS  for the most progeny to be registered with them by any Sports Pony Stud Society stallion.

At 15.hh this lovely British Warmblood stallion has a wonderful photograph on his profile page on www.horsescout.co.uk  showing his lovely head and photogenic allure. Aimbury Chester is a breathtakingly beautiful horse with tremendous paces. He is short coupled with natural elevation, cadence and outstanding good looks. He gives an overall picture of incredible beauty proving to be a natural performer excelling throughout all stages of his dressage career. He was selected as a member of the Supporters Of British Breeding Dressage Quadrille at the Young Riders European Championships opening ceremony held at Hartpury College. But its not just in the dressage arena that Aimbury Chester shows a huge careful jump over coloured poles, is completely at home across country and the only time he was shown in hand as a youngster he qualified for the Royal International Horse Show. After several years away from competition due to his busy stud commitments he returned triumphant from the Northern Horse Show winning the Riding Horse Stallion class, qualifying for both the British Show Horse Association ( BSHA) National Championships, & the National Pony Society  Ottergayle Supreme In Hand Riding Horse Championship, at fifteen years of age this was surely a testament to his soundness, temperament and breeding.

For breeders wanting to produce consistence then End House Studs’ Aimbury Chester has a predominantly bay gene and has never thrown chestnut. His lineage includes some of the top performance horses in the world such as showjumping stallions Ramiro Z , Lady Killer, Galanthus, Rastell , Raimondo, and the famous olympic mare Ratina Z gold medal winner at WEG 1994. . Wadacre Chicko, who was a graded BWBS Stallion and advanced dressage horse by Atlantus, a legend in his own life time being sire of more graded Stallions and medal winning Mares than any other British Warm Blood Society Stallion. Annika was a BWBS graded Danish warm blood Mare dam of the highest priced yearling at the High Performance Sales in 1993. Rum Moss is the dam of graded Stallions, top class competition horses including Asslam member of the Italian Showjumping team, his pedigree also includes Quorum, sire of three times Grand National Winner Red Rum .

Aimbury Chester is the ideal sire for breeders wanting to produce the archetypal eye catching competition pony, Dressage, FEI pony,  looking for HOYS potential, or a Riding Horse or  Hunter with the right temperament and looks and presence in Hunter & WHP and the top class Show pony.

If you would like to find  out more please click through to Aimbury Chesters stallion profile on Horse Scout here: Aimbry Chester – Gisburn, Lancs

As a taster of the success you could be breeding here are a list of just some of his highly successful progeny including graded stallions and winners in all performance arenas:

Kerranen Merlyn…. In fact the list of winners, champions and supremo’s just goes on and on!

And another stallion Thursden Vallye Raphael a handsome 14hh stallion licensed with the National Pony Society, & Graded with the Sports Pony Stud book who also stands at End House Stud and has a profile on Horse Scout. Who also boasts a string of very successful progeny himself. And you can find his Horse Scout listing here