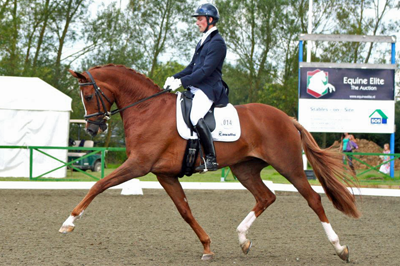 Firstly, congratulations to Woodlander Farouche and Michael Eiberg on their brilliant win at Bolesworth!

Woodlander Farouche is the dam of Woodlander Wild Child.  Her pedigree is the topic of the moment, and Woodlander Stud are experts in the art of breeding, with genetics and form being their fundamental principals.  Woodlander Stud explain what exactly (as near as you can guess these things) has made Woodlander Farouche the amazing mare that she is – ”Her dam Dornroeschen is a very, very good mare (and proven in competition) but you would want to improve her ‘roundness’ as she has a rather angular body. Farouche’s sire, Fuerst Heinrich, was a very round horse, big but not with exceptionally long legs, but he was World Champion himself, as was Dornroeschen’s sire, Dimaggio. Fuerst Heinrich seemed a good choice and we were blessed with what may be a once in a lifetime result – the close to perfect Farouche.” Her sublime test at Bolsworth just a few hours ago has justified her flood of Tweets and Facebook comments over the last few hours.

Dornroschen herself is a successful international small tour horse (with three 1st s and a 2nd at Barcelona in March this year) and both she and Farouche are ridden by Michael Eilberg.

What makes Woodlander Farouche so good? “First and foremost are her genetics. Through considered breeding, they have given her the perfect conformation and mechanics for super uphill and expressive paces as well as a temperament that ensures she has a trainable mind” says Carole Mortimer.

Definitely hitting the nail on the head and congratulations must go to Michael Eiberg, Woodlander Stud and of course the lovely mare herself Woodlander Farouche.