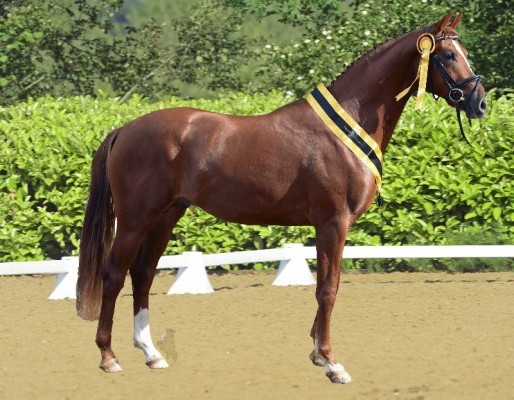 Woodlander Wild Child – A British Hanoverian Stallion and a futurity star mapped by his superb breeding.

A future dressage superstar By Woodlander Wavavoom x Woodlander Farouche, this beautifully made stallion at stud is a 16.3hh chestnut graded WBS UK.

The futurity evaluators commented on his “excellent proportions, balanced trot and his superb freedom in his shoulder” when Woodlander Wild Child scored 9.79, the highest futurity premium ever awarded at Solihull 2011.

Woodlander Farouche (his dam) had two foals and both were born by embryo transfer. Crucially though, the genetic link has not fostered a parental bond! “We’ve got an interesting photo of them glaring at each other in a car park.” said owner Lynne Crowden.

Woodlander Wild Child is a Double Futurity Elite WBS Foal and Supreme Champion Licensed Stallion (Hannoverian, WSB-UK) – Double Licensing Champion. “A champion all the way from the day he was born” say his owners.

Woodlander Wild Child became the WBS: UK Supreme Champion in 2011, and in 2013 he was again the top dressage two year old and then gained a stallion licensing “double” with both the Hannoverian International and the WBS – UK. His World Champion mother is Woodlander Farouche who was not only a world record holder for a dressage score, she also had a top scoring approved Hannoverian sire in Woodlander Wavavoom. Woodlander Wild Child is certainly from the best of the best.

He is an extraordinary young dressage stallion and is available to dressage breeders in the UK looking for a Hanoverian Stallion.

His sire Wavavoom is stallion with a wonderful temperament, power and paces. Not only is his breeding genetic exemplary, Woodlander Wavavoom has progeny which prove why he is a stallion of such renown.  18 of his progeny are listed as Elite and two of his colts are licensed – Woodlander Wild Child and also Woodlander Wales – both of whom are double licensing Champions. In 2010 and 2011, Woodlander Wavavoom qualified for every Young Horse Championship with scores of 8 and above, and as a 4 year old was runner up in the Badminton to Farouche. 2011 saw him as a finalist again at the National Dressage Championships and the Reserve Champion Shearwater 5 year old.  He gained his life approval from the German Bundeschampionat in 2012. As a six year old, he scored 86% at Advanced Medium

On his sire line, his sire and the dam of his sire, St Pr Louisiana, were bred by Woodlander Stud from a Westfalian line which produced seventeen Westfalian State Stallions and multiple Grand Prix horses, and in five generations he has no less than 14 State Premium mares.

Click here to view this incredible stallion on Horse Scout