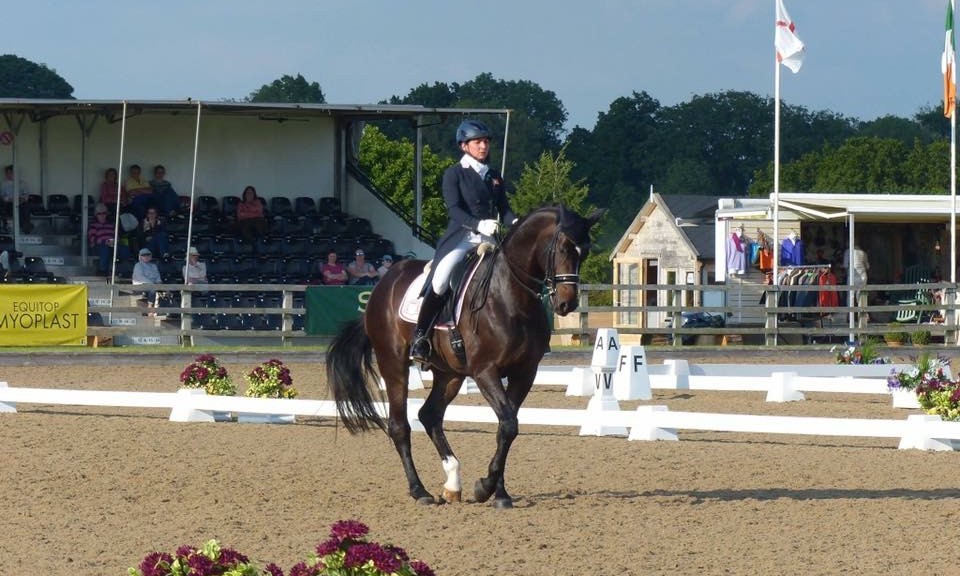 Since arriving at Talland in 2009, Abigail’s rapid rise in the world of dressage has been nothing short of impressive. Here she talks to Horse Scout about her goals and tips for keeping competitive horses happy.

When did you start to ride competitively?

I come from a non-horsey family and I was happy hacker until I was about 23 when I went to work for a show jumper in Ireland. I had always been interested in dressage and in 2009 my life changed when Pammy Hutton offered me a scholarship to be a working pupil at The Talland School of Equitation in Gloucestershire.

So that’s where you met your husband Charlie Hutton, Pammy’s son?

Yes, I arrived on a Sunday and met Charlie on the Tuesday and that was that!

How difficult did you find the transition to dressage and did Charlie help?

I had to play catch up and was given a schoolmistress, Amo, to start out competing at medium advanced! I had some crap scores, but some good ones too, and eventually rode Amo to Inter 2 and in two regional championships. That opened up the doors to take on more rides.
Charlie is a huge help and I train frequently with him — he is brutally honest with me!

Do you train with anyone else?

I have regular sessions with Carl Hester and sometimes with my mother-in-law Pammy Hutton.

What do you struggle with most?

I guess I struggled with my seat and posture as I hadn’t ridden from a young age and i’m a natural sloucher. Putting your neck in back collar really makes you sit up. Also, I had a long battle with competition nerves and I just found that just going out more and more really helped. I’m going to start pilates too.
What are your career highlights over the last year or so?
I’ve ridden at three National Championships and represented Ireland at Hartpury, Hickstead and Saumur CDIs in 2015. I also placed in the top five at Hickstead International with Armagnac and had a win at Keysoe Premier League with my young horse, Giraldo, owned by Lotty Chatterton.

Tell us about your other top horses?

I have another 12-year-old horse called Don Dino, a 17.1hh Hanovarian gelding, which belonged to Charlie but as he has kissing spine the vet suggested he should have a lighter rider. He’s really talented and we have qualified for the Nationals at advanced medium.
Then there’s Starlet Blue, a nine-year-old mare owned by Judy Peploe. She’s premium graded in Germany but very inexperienced so we’re competing at novice and elementary.
I also ride Giraldo, a really special five-year-old gelding owned by Lotty Chatterton.   I’m off to Hickstead young horse champs with him (national and international class). He has been getting 80% scores and has a really amazing big uphill balanced canter and is really adjustable. And his brain and attitude… I’ve never known anything like it — he just loves to work!

What tips would you give to other riders?

Train hard but don’t take it too seriously — it has to be fun.
Most riders put too much pressure on themselves and their horses but that can make things worse. If you get a bad mark, it can only get better! And if you’re having a bad day when you’re schooling, just go for a canter.

What are your goals?

To keep riding for a living, have happy horses and have fun.
Of course I’d also like to win a national title, go on international big tour and ultimately ride for the Irish team at the Olympics.

Any tips to help keep horses sound and happy?

Horses thrive on routine but don’t be afraid to experiment. Some of my horses do a couple of days dressage, then a hack on Wednesday, then dressage again and have the weekend off. Others have a jump day or a canter day in the middle and Dino only does dressage twice a week — he hacks and canters the rest.
Be patient and take note of what makes your horse feel the best, but don’t worry about breaking it every once in a while — sometimes routine may alter for a show so you need to be relaxed about it!
I’m also a serious fan of getting your stirrups up and working in a light seat to get your horse forward and loose in the back — it’s also great fun! Dressage horses are being bred with so much power and energy now, I think you have to be up for a bit of adrenaline to keep them fresh in their minds and entertained. I also take Giraldo to the water treadmill once a week. (see our blog about Hydrotherapy)

It looks professional and is it’s clever how horses and riders connect and how you can see the history of a horse and who used to ride it. I also like the fact that there are some great horses for sale but many at realistic prices.

Find out more about Abigail Hutton on Horse Scout

Abi Hutton has a profile on Horse Scouts’ Professional Rider Pages which goes into detail about her career and what she can offer you.  It also has some lovely photos; click through and follow Abigail Hutton on Horse Scout.
Previous article