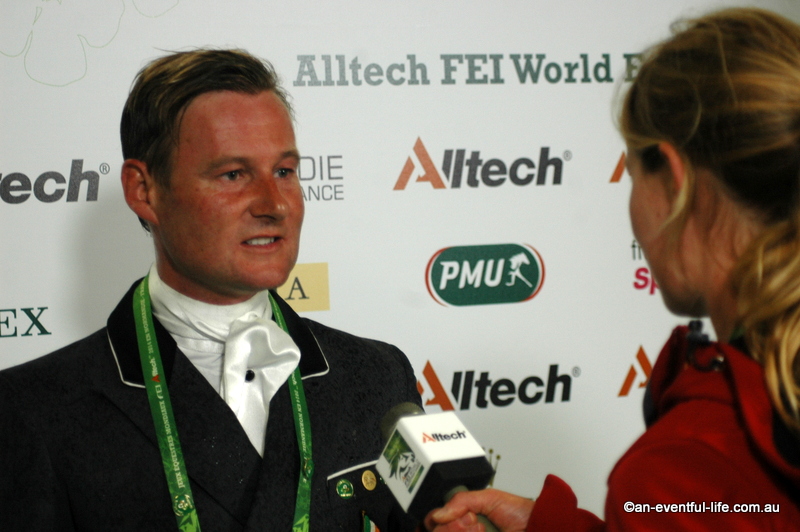 It was a “bonne journée” for The Germans on the first dressage day of the Alltech FEI World Equestrian Games which takes place in the city’s football stadium. Kristina Sprehe on the magnificent Desperados FRH stole the show to lead on 78.814 at the end of the day. Kristina has been riding the De Niro stallion for four years now.

“I am really happy today. He really concentrated and the atmosphere was amazing. For me the highlight was the pirouettes and the passage. I had a really good feeling. The piaffe, he could have been more active but we will see what happens on Wednesday.”

Dutchman Hans Peter Minderhoud coaxed a harmonious test out of the impressive Dutch stallion, Glock’s Johnson TN despite riding in a heavy downpour in a waterlogged arena.

“I was quite happy with my ride. I had bad weather and he wasn’t sure about the footing but he was ok and was fine with the atmosphere. This was the first time he has been in such a big arena but as an approved stallion he has seen a lot in his life” said Hans who has been riding the horse since from a three year old now.

Britain’s Carl Hester was riding Championship debutant Nip Tuck owned by Jane De La Mare. With the 18.1hh ten year old bay gelding who was purchased for 1000 euro as a yearling. He was formerly nicknamed “Billy Bolter” owing to his tendency to bolt out of arenas. He had clearly put this alter ego behind him and the pair produced a stunning test to see a final score of 74.186% flash up on the scoreboard putting them into third place overnight.

“I’m delighted with his test, at his age I couldn’t have asked for more and for both my owner and myself it’s very exciting. He cost me 1000 Euros, so to me, the fact he’s done so well is like my gold medal to be honest; I know he did his absolute best in there for me and did everything I asked. You don’t really know what to expect with this crowd, they’re very enthusiastic and it was such a nice reception going in. It’s 24 years since I first rode in my first World Equestrian Games (in Stockholm in 1990) so I’m really happy to come here and get that result.”

Also riding for Britain was Gareth Hughes, aboard Jane Brewin’s Nadonna. After a slightly nervous start by the fifteen year old mare, she soon warmed to the arena and gave Gareth everything for a score of 69.714%.

Speaking after his test Gareth said; “I’m really proud of her, she was nervous on the centre line and the first halt; it was a couple of per cent lower than what we’ve been scoring but from a horsemanship point of view I couldn’t have been prouder. You don’t know what you’re going to get once you go in there and sometimes you can’t ride the test you planned in your head.”

The German’s lead the way in the team competition with the Dutch in second place. Great Britain head into day two of the team dressage test lying in third place; with Michael Eilberg (with Jon and Julie Deverill’s Half Moon Delphi) and Charlotte Dujardin (with Roly Luard and Carl Hester’s Valegro).