The hunger to succeed

Our leading event rider professional profile goes to Oliver…Winner of both Badminton and Burghley in 2009, Oliver’s success has always been based on hard graft and a love for the horses he works with. Oliver inherited this love of horses from his parents. His dad, Alan, was also an event rider, while mum, Eve, showed side saddle at county level.

Oliver began riding when he was 7 years old. His first success came when he was 11, with his pony Cool Mule at the Horse of the Year Show. At 13 he went on to represent Britain on the Pony eventing team at the European Championships, and he quickly moved through the ranks. For three years he was stable jockey to the late British Event Team show jumping trainer, Kenneth Clawson, in Leicestershire.

When Oliver eventually set up on his own at Lubenham Lodge, Leicestershire, he had just a few pounds in his pocket but an unquenchable thirst for success. Less than two years later he was able to buy his own farm in Dudleston Heath near Ellesmere, Shropshire where he is now based.

In 2005 the Hon William Russell’s Topping provided Oliver’s first crack at Badminton and he made the most of it by finishing in 12th place. This earned them an individual place at the European Championships, Blenheim, the same year. Edward & Robert Nicholson’s Flint Curtis took over as Oliver’s top horse in 2006 after placing third at Badminton, the horse’s first four star event. Oliver remained on the British Squad, riding Flint as an individual at the Aachen WEG that year, before earning his first team place – and a European Championship gold medal – at Pratoni in 2007. 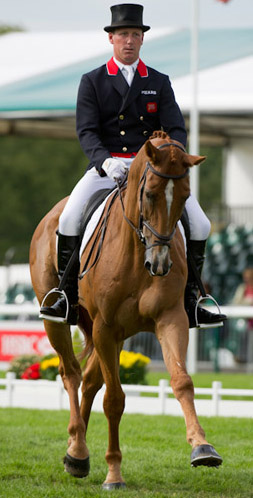 Then came his most successful year to date: 2009. Oliver and Flint Curtis won their first CCI**** at Badminton and Oliver then went on to win Burghley CCI**** on his other top grey horse, Andrew Cawthray’s Carousel Quest. He duly finished the season at the top of the British Eventing points table for the first time, having previously been top British rider.

Great results continue, with successive top placings at both national and international events. His string of horses, from youngsters to four star competitors, is impressive: his famous greys might no longer be in the start box, but they have worthy replacements. In 2012 Oliver was given the ride on Paul Ridgeon’s 4* horse Armada, and won Oliver the British National Championship title the following year.

In May this year, at one of the toughest Badminton’s in decades, Armada finished in the runner up spot. Meanwhile Black Tie II placed 4th at his first ever CCI4*, earning Oliver a place on the British Squad for the 2014 World Equestrian Games, with Armada named on the Reserve list.

Oliver finished the 2014 season at the top of the BE Rider Rankings, with a clear points lead. Armada was =3rd in the Horse Rankings.

New and exceptional proven competition pony advert placed with Horse Scout – Rober Dusters’ Record speaks for him self Actual £4050, Points 2336 Qualified HOYS Foxhunter final 2011 and 2012 Qualified HOYS Pony Show Jumper final 2014 2nd in the RIHS Winter JC championship 2012 Too many wins to mention Tegan has owned and produced Dusty over 4 1/2 years Has jumped all the top 148 classes Great to shoe, clip, load etc.. No vices A heartbreaking sale as rider is out of ponies this year Videos can be seen on YouTube search for Tegan Jones and Robe Duster MUST have 5* home Serious enquires only, please no time wasters. To see other horses for sale visit us

Sell your horse on the fastest growing equestrian network, endorsed by professionals. You can advertise weekly, and by updated your adverts for free move your listing back to the top of the page free of charge!

Exceptional range of competition horses, from jumpers to dressage horses available  for sale on Horse Scout, with the option to view the rider, and owner profiles too!

Our industry leading horse sales adverts allow numerous videos, pictures, and connections to be featured with no hidden extra costs. Adverts remain under your control within your profile. All horse adverts start with a basic profile, it is quick and easy with bespoke sales questions built into the process . Adverts can feature ownership, veterinary, reference history and more, gaining trust between buyer and seller, and saving you from timewasting, we get horses for sale sold!

Our industry leading horse sales adverts allow numerous videos, pictures, and connections to be featured with no hidden extra costs. Adverts remain under your control within your profile. All horse adverts start with a basic profile, it is quick and easy with bespoke sales questions built into the process . Adverts can feature ownership, veterinary, reference history and more, gaining trust between buyer and seller, and saving you from time-wasting, we get horses sold!

Catherston Stud is pleased to announce that the Champion SHB Stallion & Champion BEF Futurity Stallion TIMOLIIN is to remain in Great Britain. The family Loriston-Clarke and friends have managed to purchase this horse from his breeder and are very excited about producing him next year as a stallion and dressage horse. He has fantastic paces, a lovely temperament and loves jumping so is an ideal sire to breed quality dressage horses and eventers. His Sire, Totilas was World and European Dressage Champion, the first horse to win all three available gold medals at a World Equestrian Games in 2010. His name is legendary and was the first dressage horse to top 90% at Grand Prix level and at that time held 3 world record scores. His dam, the International Small Tour Dressage mare Samira, was ridden by Jane Gregory and is by the Dutch stallion Sion. Timolin was presented at the BEF Futurity as a yearling in 2012 where he was awarded the Overall highest score of all Dressage Yearlings with a score of 9.38. A very good Elite score. In 2013, as a two year old he was shown at both The Royal Bath & West Show and Devon County where he won his classes and was Sports Horse Champion at both shows. He also did the Futurity in 2013 where he was Reserve Overall Dressage Champion two year old with a score of 9.34. He was also graded as BWBS stallion this year. Last year, as a three year old he again was presented at the BEF Futurity where he was the Overall highest score of all dressage three year olds with a score of 9.43. This score of 9.43 is the highest score recorded so far ever for a three year old dressage horse and he has the highest scoring average of any horse or pony ever, presented at the Futurities three times. He also attended the Sport Horse Breeding of Great Britain Stallion Grading where he was Graded and Champion. Timolin has 9 foals eagerly awaited in 2015 and some will probably be shown in Sport Horse Classes as foals.

Horse Scout in it’s opening month has already hosts some of the best competition horses on the market for sale. Grade A show jumpers, advanced eventers, grand prix dressage horses and more!

Horse Scout prides itself on being a platform for everyone, and gains the respect of the leading riders, trainers, and producers of competition horses.

Our sales questionnaire draws history and veterinary information from the seller like no other site, saving the purchaser from time wasting.

In just our first month live we are proud to be hosting a diverse range of event, dressage, show and show jumping horses for sale. The horses range from novice to advanced across all disciplines!

We have riders from all over the already becoming involved ad supporting us with their professional listings and horse profiles, take a look now!